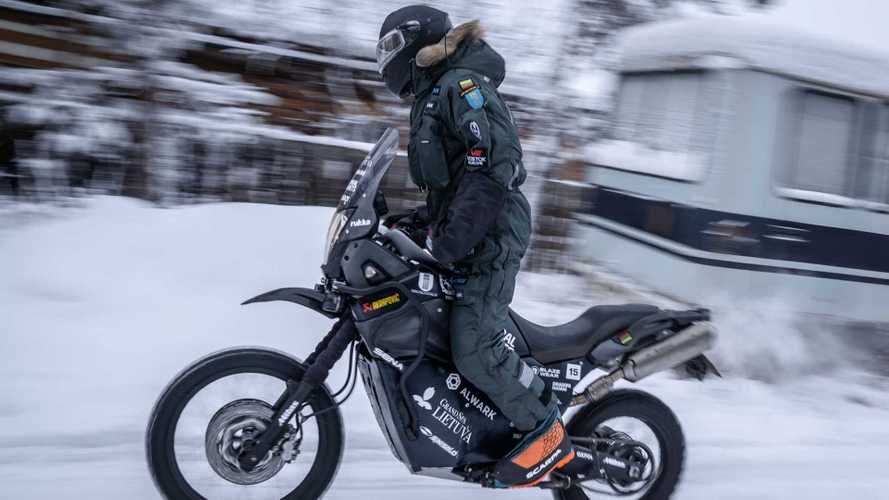 The Coldest Ride is happening right now on the Road of Bones, in February, in Siberia.

Karolis Mieliauskas, a 37-year-old Lithuanian adventure motorcyclist, has begun a journey by motorcycle with the aim of traversing Siberia’s “Road of Bones.” Siberia, in the far east of Russia, can see temperatures as low as -60 degrees Celsius (that’s -76 degrees in Fahrenheit, if it matters). This is very dangerous cold, and he’ll be in it for 621 challenging miles.

ARE YOU SHIVERING YET?

His chosen steed for the journey is a largely unmodified Yamaha XT660Z with ice-studded Mitas tires, and wearing a Schuberth helmet (Schuberth is a sponsor of the ride). Happily, he has a chase vehicle and a crew, because the cold has made everything very brittle, and he has already had some trouble with wires breaking on his bike (his “tech guy” fixed them and got him back on the road, if it can be called that).

He completed a two-day shakedown test ride in Yakutsk, Siberia, battling strong winds and -40C temperatures (this is where Fahrenheit and Celsius meet: -40C is the same in both units, and may simply be referred to as “damn cold.”) His test ride was 100km (62 miles) across, of course, what else: a frozen river, on Monday the 4th of February. He is aiming for his destination of a town just 450km south of the Arctic Circle, Oymyakon. It is one of the coldest continuously inhabited places on earth. If all goes well, and he is on schedule so far, he should arrive on the 10th of February.

Mieliauskas is no newbie when it comes to cold endurance rides. He rode almost 490 miles across a frozen Lake Baikal without a chase vehicle, support team, or camping gear. He didn’t even carry a satellite phone. He also rode 11K kilometers (6835 miles) in 12 days, from the capital of Lithuania, Vilnius, to Vladivostok, in twelve days, in 2016. This, at least, was in July.

The adventurer insists that his most current challenge is in fact an act of meditation; he isn’t out to set a record but instead his interest is in his own personal boundaries. and going deeper into what separates the mind from the body.

He said, “I basically call endurance riding ‘active meditation’ because from early morning to late evening on these trips, I am just riding a motorcycle which is not designed for trips as long as these. As a result, this makes the journey physically uncomfortable. However, it is a form of self-discipline because when sitting with a straight spine for up to 15 hours a day, I learn to ignore those signs from my mind such as ‘you are too tired,’ ‘you are too hungry,’ or ‘you are too whatever.’ By rejecting these statements, I see that I am not this body, or this mind, or these thoughts. The most interesting part of these trips is when I ask myself ‘who am I?’ By continually asking this question and again rejecting all possible answers, I finally experience the truth.”

He continues,“The Coldest Ride is an exploration of the connection between the body and how the mind plays with the cold in these situations. In tough conditions such as these, I have a number of devices to show me where are my theoretical limits and going beyond them is something I think that we should all do.”