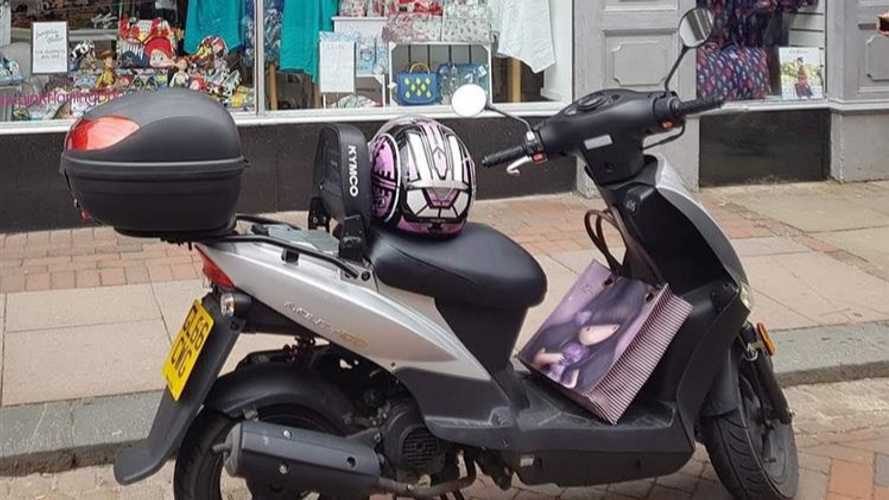 Look out LoJack, witches are scooping up your defunct motorcycle tracking business!

Since LoJack is no longer selling a system specific to motorcycles, you may want to research a different kind of motorcycle recovery method. One self-proclaimed witch in the UK insists feels as though she’s filled in the gap for this now-absent tracker: her coven cast a spell to aid in the recovery of her stolen scooter – and she insists it worked.

WE LOVE SCOOTERS I PROMISE

Deborah Samuels-Stuck, 51, had apparently parked her Kymco Agility 50 outside her home in Holmside, Gillingham, UK, a suburb near London. The thieves wrested the bike from the cable lock she had used to secure it with bolt cutters but were stymied in their further attempts by a disc lock on the bike.

“They came with bolt-cutters,” she said. “They knew what they wanted but they couldn’t take it because of the disc lock. They were caught on CCTV but the cheeky things reached up and twisted it up towards the sky.”

The perpetrators, in “black puffer coats and balaclavas,” returned on a later date with help, and simply hefted the 50cc scooter up over the front gate, and, we assume, into a waiting vehicle, so that the disc lock could be cut off the bike in a remote location without further worry about constabulary interruption.

This is where Samuels-Stuck’s brilliant plan came into play. A psychic medium and a witch, she proclaimed “I was so angry at this happening that me and my circle of witches cast a spell. I messaged my friend who happens to be a witch. The next thing is all these witches had got together and taken part in a spell. There were 20 witches in total, two circles of witches.”

She admitted, though, that when it comes to spells one has to be quite careful about the wording, and that the spell is “not a hexing – if you hex it can come back on you ten-fold. It’s not worth the trouble. My friend said, ‘they will know no peace until the bike is returned’ and repeated it several times over.”

The proof came two days later when the scooter was mysteriously returned. She said, “I opened my door on the 7th and the bike was there, returned.” She insists “the message is that when you release things in prayer and spells, it works.”

Certainly it was the prayers and spells that brought the bike back to its owner – that or the thieves frightened themselves thoroughly with the blinding speed and supersport handling that comes with a used 50cc Kymco scooter, which, in good fettle, will sometimes fetch nearly a thousand dollars (US). Look out, LoJack! Witches may be coming for you car recovery business!