Ask RideApart: What Is The Model T Of Motorcycles? 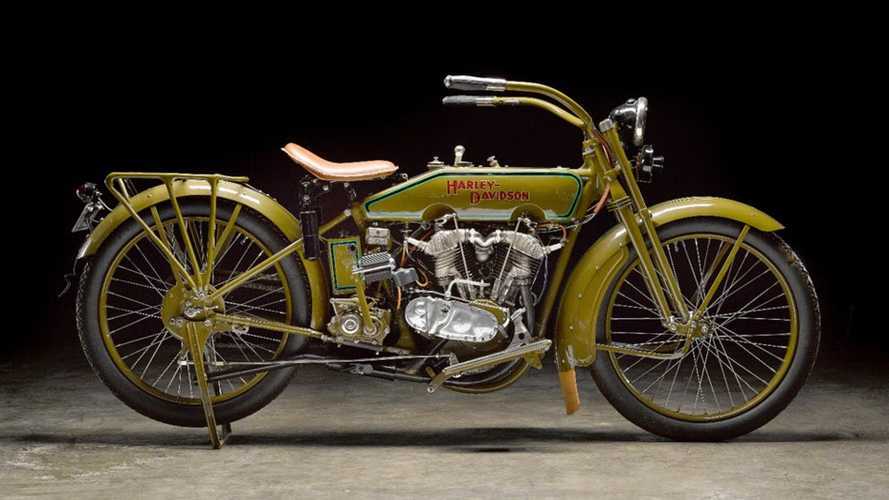 Affordable, reliable, and fast, this Harley won a war and plenty of races.

Occasionally we all gather in the break room of the virtual RideApart offices and discuss motorcycle-related topics, which is when someone asked, "What was the Ford Model T of the motorcycle world?" We all pondered on this and went back to work, but eventually, I slipped down an internet rabbit hole of bike history looking for the best answer.

In the beginning of the automotive age, it was all horseless carriages and motorized bicycles. There are motorcycle companies today who have histories stretching back to 1901 (Indian and Royal Enfield) but it wasn't until the teens that pedals vanished and they started looking like motorcycles. The Ford Model T changed horseless carriages into cars, and the Harley-Davidson Model J forever cast off the bicycle aspects of the motorized bicycle. By the time the US entered WWI in 1917 Harley-Davidson had sold 18,000 Model J (also called the Model F when equipped with magneto instead of battery) motorcycles, and the military ordered another 20,000 of the fast, reliable, technologically advanced bikes.

Ford had made plenty of cars before the Model T, but it was that 1908 model that was so reliable, easy to use, and affordable they it changed the perception of the horseless carriage from a toy for the rich, to everyday transportation. Harley had already been making bikes for more than a decade when the Model J came out, and Indian even longer, but it was the 1915 combination of a new 11 horsepower 1000cc/61c.i. V-twin (automatic pressure feed oiling, cam opened/spring closed valves) with a 3-speed sliding gear transmission that set them on the path to domination.

Harley-Davidson introduced their (officially named) Model 11 V-twin in 1915, named for the guaranteed power output of 11 hp from the intake over exhaust engine, which promised a 65 mph top speed. Both of those numbers were sworn to, in writing, by the manufacturer. The number would increase with the engine's performance, and the letter suffix would change to indicate different options, but all of these bikes are popularly known as the model J. These were the bikes that General Pershing choose when pursuing Pancho Villa on his Indian Powerplus motorcycle through the deserts. When America went to war, it was the Harley Model 17J/F that they took with them to quickly deliver messages, or machine guns.

A Ford Model T topped out at just 45 mph on a flat road, less in the rough or when geared for truck duty, and most other cars weren't much better. Back in these early years, there were few paved roads, and not much more than dirt paths once you got out of the major cities. A 1915 transcontinental trip took a well supplied film crew in cars 4 months, and after the war an army convoy only managed a 6 mph average in their trucks on their 24 day coast to coast trip. Meanwhile, "Cannonball" Baker was able to do it in just 11 days on a motorcycle before the war, and even today the Harley-Davidson Model J is a favorite in the annual motorcycle cannonball race/rally.

Here in the 21st-century, these Harleys can still keep up in city traffic (but their brakes are not up to the task) and people cruise them to events as if they weren't 100 year old relics. Yes, there were refinements and improvements, but the powertrain and cycle parts were hardly changed until after the 1929 model year. Even then, the new flathead motor was a bit of a step backwards, compared to the pocket valve design, but the crankcases and bottom end were improved. Only a handful of years later the Knucklehead would be introduced as much as a leap forward as the Ford Model A was.

What do you think? Are we being blinded by the American flag? Do you think there is an English or German bike that deserves this title?