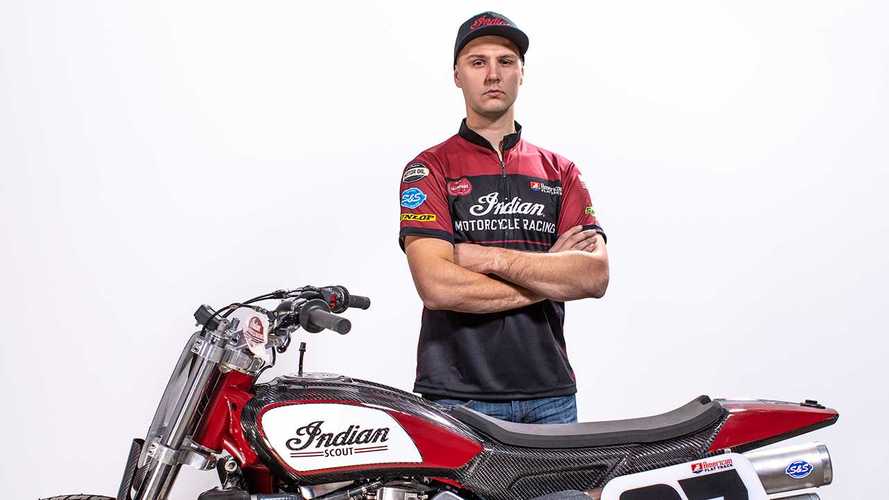 The youngest member of the team speaks up.

At only 21, Bronson Bauman has already accomplished a lot. He took up flat track racing in 2013 at the tender age of 14. Within only 5 years, he made his way through the ranks, stepping five times on the podium in 2015 in the GNC2 division before making his debut in the major leagues, in the Grand National Championship Class in 2016, then the AFT Twins in 2017. Over the course of his 2018 season, Bronson participated in 10 races out of 18 events, half of which he spent in the saddle of the Wrecking Crew’s FTR 750, filling in for injured racers Bryan Smith. It’s while replacing Smith that Bauman stepped on his very first AFT Twins podium. His success on the dirt track wearing the Indian factory team’s colors has lead him to the opportunity of a lifetime: become a full time member of the Wrecking Crew for the 2019 season. We had the chance to chat with Bronson about his future with the Wrecking Crew.

What got you started on a bike?

Well, one Christmas, my brother got an XR70 (Honda), I wanted a go kart. We both got them, but I got tired of the go kart, burnt all four tires and told my dad I wanted a motorcycle. So my brother received a new bike and I got the XR70.

It all kind of tumbled down hill after that, because not long afterward, we were introduce to flat track racing. We didn’t ride for long before we started racing.

What made you want to go for flat track racing rather than, say, motocross or freestyle?

To be honest, in 2003, Ricky Graham Memorial Race was organized 45 minutes away from our house, and our neighbor called and asked whether we could drive their son’s motorcycle down. My mother is the one who said “We should let the boys race (Briar and Bronson).” That was our first ever race and we didn’t even know what flat track was. We didn’t really know what motocross was either—we were just kids with motorcycles, and that was it.

Our first race was flat track, so we never actually gave motocross a fair chance because after the first race, we wanted to keep on doing flat track.

In your opinion, what does it take to get into flat track racing?

Personality wise—there’s a bunch of different personalities in the pits. For a random person who has a motocross bike, it was a lot easier in California because a lot of local races in Salinas had what was called “Open Traction Class”. So people would get a taste of flat track riding in the Open Traction Class. So it’s a lot easier there, because I don’t see a lot of that around the Midwest area. It varies depending on what State you’re in. Some places don’t offer that option so you kind of need to know someone who has a set up where you can try their bike or who can point you in the right direction to get you started.

What does it mean for you to be joining the Wrecking Crew?

It’s really a dream come true. This is what 10-12 year olds dream of, getting to that level where you’re on the factory team. In dirt track there’s not a lot of that. There’s factory Harley, and now Indian is huge. It’s amazing that I’m 21 years old and I get to ride for the Indian factory team, the best team in the pits. It’s remarkable for me. I knew I was eventually going to get there, but for it to come this soon, I’m even blown away.

How was the transition to the Indian FTR 750?

It went a lot better than expected. I feel like I’m a pretty capable rider, able to get on a motorcycle and going at a decent speed right away. Took me a bit longer to get that podium speed, but once I got on it, it was unbelievable. The motorcycle, the agility of it is mindboggling. It reacts perfectly.

I was amazed by the motorcycle itself. It was more of an “Wow! This thing is awesome! Let’s make small minor changes to make it better.”

Some competitions take more mental fortitude, others, more physical strength. Where does flat track stand for you?

How does it feel be able to work alongside Jared Mees?

It’s awesome! He’s dominated the sport for the past 2 years, he’s always had a very strong work ethic. He is sharing some insight with me and it’s huge for me, being as young as I am, to work alongside what is soon to be a legend. He’s coming into his own.

What type of preparation do you do?

I’ve really been working a lot on my cardio for the training asepct. That will carry into the weekly routine once the season starts.

To prepare for a race, typically, it’s just get there, hang out, relax until race day. Just stay calm. The worst you can do is overthinkg anything. Just be happy to be there and get ready to kick some butts.

Another big deal this year is that you’re going to be racing in the same team as your brother. Is racing alongside your brother a challenge or an advantage?

Neither, honestly. Of course, I want to beat my brother, so to me, it’s the same challenge as usual.

And do you find yourselves commenting on each other’s work and helping each other out?

A little bit. I did it more in the past, I would help him more when I was racing singles. I would tell him to try a certain line with the twins. Now that we’re both on the twins, he’s coaching me more, telling me what to do on the motorcycle and how to ride it.

He helps me out more than I can help him out because he has more experience than I do. This is my fourth year racing with the twins. He has more seat time on the twins, knows how to react a bit better and helps me out.

Is being on the same team going to change your professional dynamic or will it be business as usual?

Hum, business as usual. We’re brothers off the track, but we’re rivals on the track. I want this just as bad as he and everyone else do. I think once I become more of a threat on the track, the information will stop being shared as much. Maybe we’ll race each other a bit cleaner than we would someone else. We’ve always had a pretty strong relationship when it comes to racing.

We have not had any test done yet. The bike is going to be pretty much the same as last year. It was an excellent motorcycle and I look forward to riding it as soon as possible.

What do you think of the new trend that brings the flat track to the streets with the introduction of flat track inspired models like the FTR 1200?

I absolutely love it. It’s going to help grow our sport. When people look at the FTR 1200, they’re going to go “Wow! This thing is amazing!” and I know a lot of people who already think that. Because it’s a flat track-based motorcycle, when someone looks at it and doesn’t know what flat track is, hopefully they do some research and think that flat track is cool, which could bring more fans and more competitors. That’s what I think is really going to happen and I hope it does.