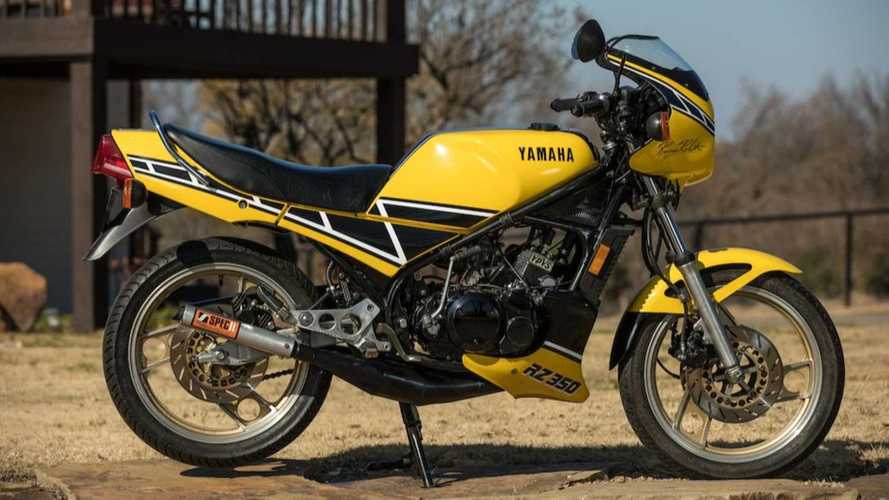 A beautiful classic in traditional Yamaha Speed Block livery could be yours.

Because of increasingly strict EPA regulations, the Yamaha RZ350 was the last legal two-stroke streetbike sold in the U.S. Powered by a 347cc parallel-twin, the 6-speed bike had a first-of-its-kind two-stage catalytic converter in each muffler in order to pass the EPA sniff-tests. The bike was ahead of its time in other ways, too: common on modern sportbikes, the RZ had a cutting-edge (for its time) perimeter-style frame, as well as an electronically-controlled variable exhaust port system.

SMOKE IF YOU GOT 'EM

The RZ350 remains a beautiful machine even today – it was created as a tribute to Yamaha factory racer Kenny Roberts. Roberts was AMA Grand National Champion twice, and won the Daytona 200 and the 500cc Grand Prix world champion three times each. Roberts’ bikes were the first ones to display artist Rollin "Molly" Sanders’ black-and-yellow paint scheme, the Yamaha signature officially known as "Speed Block." You can even see this traditional Yamaha livery echoed throughout their modern lineup; the colors vary but the tradition lives on. This particular bike has decals of Roberts' signature on each side of its fairing.

Cycle World road tested the Yamaha when it was released and stated that, "it became an everyday occurrence to be swarmed by curious people whenever we parked the RZ. If good looks could kill, the RZ would be the atomic bomb of motorcycles." This writer can confirm that this is still the case—having sighted its twin at a local bike night, there were plenty of folks gathered to take pictures of this yellow thing; at 30+ years old the styling is beautiful and remains a classic.

The RZ is one of the great forebears of the modern sportbike, now common but in its time a revelation; a tool specific to straightening out twisties and granting the rider the thrill of pure controlled speed.

Marbles Motors acquired this complete RZ350 in need of restoration. They completely disassembled and rebuilt the engine, refreshed and replaced all electronics as needed, overhauled the brake system, cleaned and rebuilt the carburetors (using new needles and jets) and tuned the bike to the currently-fitted Spec II expansion chambers, though included in the sale are the OEM exhaust pipes in good fettle. The bike’s paint is original and is in excellent condition.