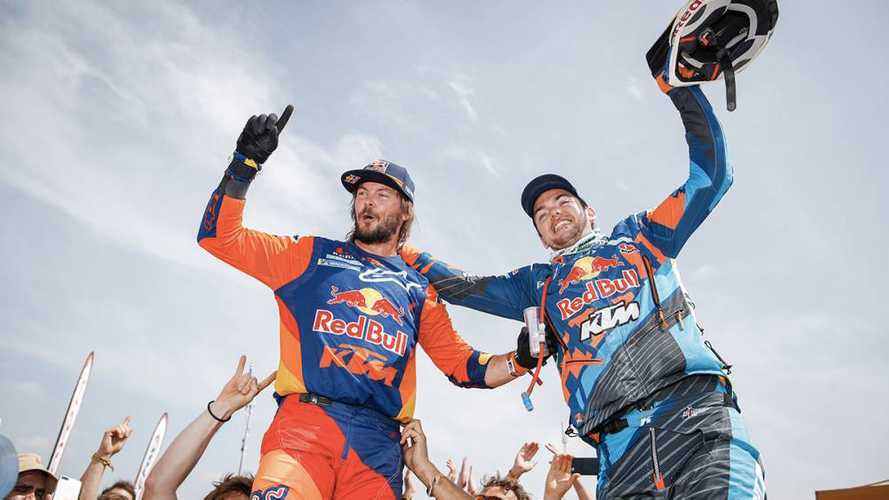 It has been an eventful Dakar to say the least. In the moto class, only half of the starting 149 competitors finished the race, a reminder of the rally’s gruesome reality and of the challenge it represents. While racers of all categories will be packing up and heading home thinking about how to improve their performance next year, the KTM crew will be celebrating. The factory team saw three of its riders take the first three spots in the final classification, lead by Aussieman, Toby Price who secured KTM's Dakar domination in the moto class for an 18th consecutive year.

This is Price’s second Dakar win—his first, in 2016, granted him the title of first Australian winner of the rally. Alongside his teammates Austrian Matthias Walkner and Brit Sam Sunderland, the KTM factory managed to take the lead at the end of the 8th stage on Tuesday. Until then, the race had been lead by Monster Energy Honda team competitor and fellow American Ricky Brabec who ended stage 7 with a 7-minute advantage over the racer behind him. An engine failure during the San Juan de Marcona to Pisco leg forced him to abandon, leaving his chances of winning the rally behind.

Once Brabec was out, Price took the lead for the rest of the rally and took the win despite a major wrist fracture. Second place went to teammate Walkner who had to deal with an ankle injury sustained during the first half of the race.

Third place could have been Chilean Pablo Quintanilla’s, however, he suffered an unfortunate crash during the 10th and last stage of the race. With Sam Sunderland 1-hour penalty revoked, Quintanilla landed in fourth. Sunderland almost didn’t get to step on the podium. In fact, the rider was slapped with a 1-hour time penalty by the officials at the end of stage 8 after being accused of causing his navigation system to crash on purpose. The penalty was finally annulled which allowed Sunderland to take the third position.