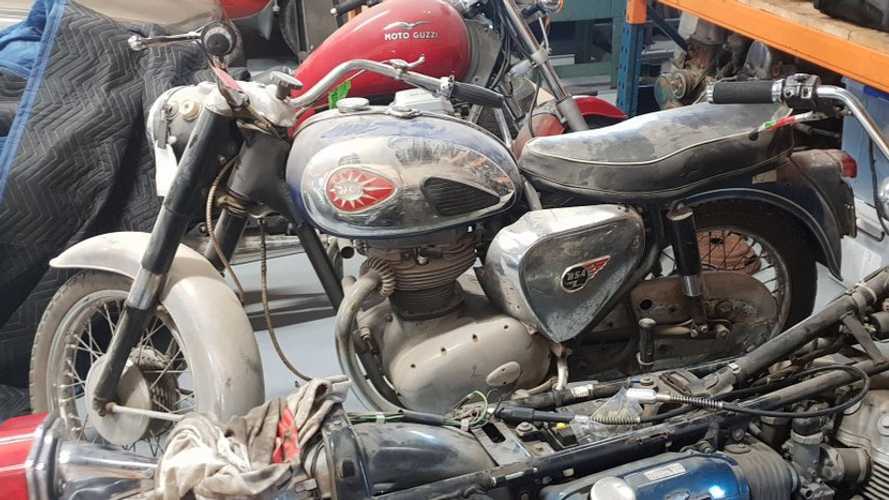 It’s amazing what you discover if you have the right dads of friends.

Even covered in a serious layer of dust, there is no doubt that this 'barn find' is in beautiful shape cosmetically. What isn’t quite as clear is exactly what precious British treasure this owner found in his friend’s dad’s garage (I want friends like his!), or whether it runs.

BRING ON THE BSAs.

A healthy discussion on Reddit started the speculation with "Birmingham Small Arms Company” (BSA) A65 (650cc), single cylinder Gold Star before shifting gears to a twin cylinder Lightning, Rocket or Thunderbolt (anyone else LOVE these names?). However, after a bit of back-and-forth, the thread collectively concluded that it is probably a 500cc, or “A50” Star or Royal Star with a twin cylinder “unit construction engine” which means that the engine and gear box are joined together, and that was built in the mid 1960’s.

A local vintage motorcycle aficionado and member of the Canadian Vintage Motorcycle Group (CVMG) since 1976, Paul Rostic, agrees on the identification and adds that it’s likely a model meant for the UK market since it has an enclosed chain, which was not as popular an option in North America.

As a point of comparison, another Reddit commentator posted this pic of a later model BSA A50 Royal Star 500 Twin 1970. They do look very similar, but to this less practiced eye, that doesn’t mean much of anything. What is endlessly enjoyable is reading all the details about the differences in engine construction, chassis, and displacements that are visible to collectors of the British “Breezers”, the popular ‘crotch rockets’ of the time and serious competition to Britain’s other main motorcycle manufacturer, Triumph.

Oh, and one more: this video from a very lucky American collector. His is a candy-apple red, 1967 (or maybe '66) Lightning possibly bought from either the original or second owner who’d had it since 1971. The odometer reads only 17,000 miles and it looks like it has all its original parts. This one also has the covered chain case, an indicator that it may have been built for a British rider, originally.

Whatever model this BSA might be, what is clear is that it is a gem and coveted by many. Time to go poking around more of our friend’s Dad’s garages.