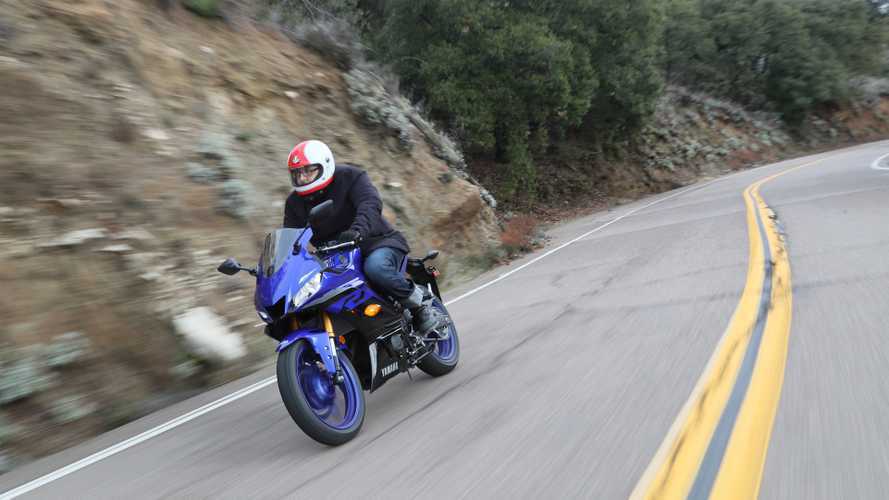 There's a scene in 1995's Tommy Boy where the Late, Great Chris Farley (may he rest in peace) tries to cheer up David Spade by putting on Spade's coat, dancing around, and singing, "♪♫Fat guy in a little coat♫♪". Now imagine, if you will, that scene but Chris Farley is played by yours truly and the coat is played by Yamaha's brand new 2019 YZF-R3. Thankfully, unlike in Tommy Boy, there wasn't a catastrophic end to my ride brought on by my own overexuberance. There was, however, a lot of fun had and good roads ridden. So let's get into the nitty-gritty and talk about the new R3, shall we?

Now, there's something you need to know right up front. I am not a sportbike guy. I don't necessarily have anything against sportbikes, they're just not my style. Up until I threw a leg over the R3 I'd never ridden a sportbike, so I was the perfect candidate to try out Team Blue's entry-level supersport. So, how was it? Well, let's talk about it.

For starters, before we get into the opinions on the R3, let's discuss its technical details. The littlest sibling in the YZF-R family, this tiny, mighty supersport is powered by Yamaha's 321cc, water-cooled, fuel-injected, four-stroke, 180-degree parallel twin. The mill is mated to a six-speed trans, and gets power to the rear wheel via a chain final drive. First gear is super low and provides a ton of grunt to get off the line, and fifth and sixth are, according to Yamaha, overdrive gears (we'll talk more about sixth gear in a minute).

The 321cc wündermill acts as a stressed member in the bike's stiff steel trellis frame. Suspension is all new for 2019 with rigid KYB 37mm upside down forks up front and a stout KYB monoshock with seven-step preload adjustability. The triple clamps are lighter and stronger, and the 10-spoke cast aluminum wheels come wrapped in Dunlop SPORTMAX GPR-300 rubber. Braking is provided by a 298mm floating rotor up front grabed by a dual-piston caliper and a 220mm floating rotor aft clamped by single-pot caliper. The R3 can be had with or without ABS, and the price difference is so slim that you'd be crazy not to spring for the antilock brakes. Fancy, eh?

The bike's ergonomics are all new for 2019, too. The tank is lower and wider, with deep cutouts for your knees (and a rad-looking set of M1-esque louvers to spice things up). The old handlebars have been replaced with minimalist clip-ons that give the bike a more aggressive, supersport riding position. The control pods are clear and well laid out (well, except for the turn signal switch and horn button, but we'll talk about that later, too). The digital instrument panel is big, intuitive, and easy to read (especially when you're tucked in on the freeway), and the whole cockpit is very clean and modern. All of this makes it easier for you, the rider, to tuck in, grab the tank, and speed off looking like our man Rossi.

As for the bike's fresh new look, the front cowl and fairing are all new. Each was redesigned to fit more with the R6 and R1 design language as well as provide more protection and less buffeting from the wind. In fact, the entire bike was designed to look, essentially, like an M1 that got shrunk in the wash. Let me tell you, friends, it works. Just standing still the R3 has great presence—it looks big, fast, and broad-shouldered despite being as small as it is—and feels incredibly well sorted just sitting parked. It's very much a grown-up bike and feels like more than just a beginner machine.

That's all the technical stuff out of the way, now let's get into the juicy part—opinions!

Last week I flew out to San Diego to thrash an R3 through the mountains around Oceanside, California, with Yamaha. We—me, my colleagues in the motoring press, various and sundry Yamaha officials—were presented with the new bikes in an ersatz bike garage set up deep in the bowels of a seaside parking structure. It all felt very clandestine. There, we were provided with an informative powerpoint then set loose to take pictures and get acquainted with the selection of R3s. Once that was done, we were given our riding orders for the next morning.

So, I don't know if you know this, but January is peak rainy season in the greater San Diego metro area. The morning of our ride dawned dark and rainy. The temp read a cool 50 degrees on Fahrenheit's thermometer, and the rain was that kind of sticky, spitty, slimy rain that clings to everything, is impossible to wipe off, and makes you miserable. We set out just before 08:00, crept through town for a bit, then hopped on the freeway to really open the bikes up.

On the freeway, I found the R3 remarkably comfortable and stable. We wound up through the gears to cruising speed and the bike never once complained about hauling my fat ass up to 70-ish miles per hour. The engine is high strung, but not overly so. More in a funny, neurotic aunt kind of way rather than a nervous chihuahua on its third espresso way. The seating position is sporty, and I found the bike a bit small for my 6'1" frame and 34" inseam, but I was otherwise pleased with the bike's ergos.

Let's talk about superslab riding and sixth gear real quick. Now, I've ridden some buzzy, high-strung bikes on the freeway before (shout out to my wife's old '79 KZ440 buzzbomb here) and I was expecting much the same from the R3. I figured we'd get out there and my hands'd go numb after a while of wringing every pony out of the parallel twin. You know what? It didn't happen. At speed, the R3 was smooth as butter, relatively quiet, and the engine always had more to give. It didn't sound or behave like a 321cc bike at all.

At one point, I was in sixth, tucked in, pushing 70 mph and wanted to catch up with the rest of the pack. I rolled the throttle on and the little R3 responded eagerly. It wasn't, like, a violent blast of speed or anything, but when I cracked the throttle I accelerated in sixth with hardly a complaint from the engine. Nice, Yamaha. Very nice.

Eventually, the rain petered out and the sun grudgingly came out from behind the clouds just as we got into the first set of challenging twisties. We took the corners real slow since the roads were still wet and slimed with oil, dirt, and other runoff, and generally took our time getting out to the mountains. Once the roads dried out though (well, for various metrics of dry) it was on like Donkey Kong.

We spent the rest of the day flogging the R3s through canyons and up and down impossibly curvy mountain roads. All the while we took pictures, dodged lingering patches of slippery mud, gravel, and forest debris, and generally had a blast. The R3 did exceptionally well on those mountain roads. The stiff frame and new, upgraded suspension make the bike stick, corner, and maneuver like a bigger, more expensive bike. I rode both a standard and an ABS-equipped bike during the trip, but I didn't notice any appreciable difference. To be fair, I never really got into the brakes hard enough to engage the ABS, so my experience isn't an indictment of the ABS system.

So, final thoughts. The 2019 YZF-R3 is a well-mannered, eager, competent little bike. It's comfortable enough—although it's a bit too small for me—good looking, light, agile; everything you want in a sportbi... sorry... supersport. All told, we put around 200 miles on the little R3 throughout the day, most of those in fast, hairy, decreasing-radius right-hand corners on slightly damp mountain roads. Throughout it all, the bike did everything I asked of it with hardly a complaint.

Were there negatives? Sure, but they were small and kinda niggly. The mirrors suck and desperately need longer stalks, the kill switch and start button are one and the same (which took some getting used to and I'm not sure that I like) and the turn signal switch is right above the horn button which makes for some fun times.

This is a good bike, friends, and a great introduction to the sportbikes market. Yamaha really knocked it out of the park on this one. I'll give the R3 a solid B+/A-, and I'd definitely recommend it to new riders or grizzled vets like me looking to get into something sportier that's not totally insane.