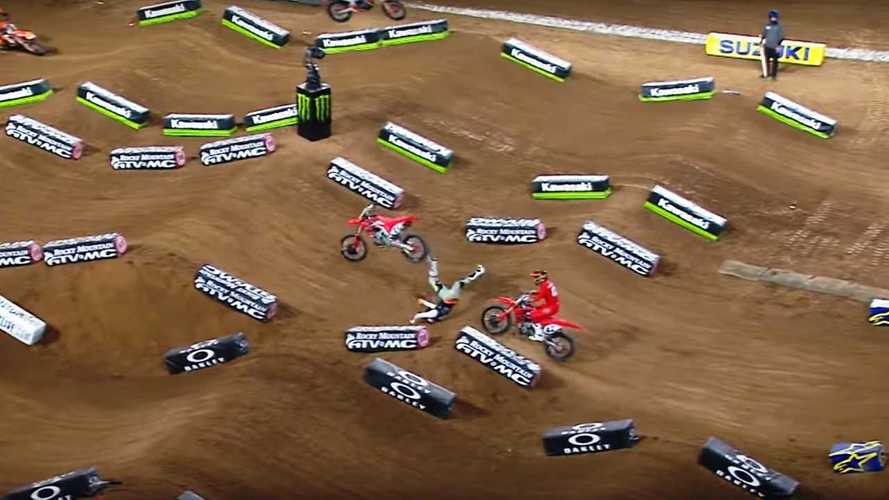 James "Bubba" Stewart was known for being his own worst enemy on the track; always fast, but often crashing and hurting himself. In only the second start in the top 450cc Supercross class, his younger brother Malcolm has unfortunately followed in Bubba's footsteps, breaking his femur and likely ending his season. Running faster than anyone through the whoops, something both Stewarts are known for, Malcolm's bike took a bad hop and endoed over him, causing the race to be red flagged and restarted.

Whatever happened to James Stewart?

Malcolm had a good heat race to qualify for the main event, getting a good start on his Honda to enter the first corner in second just behind Marvin Musquin on a KTM. Giving chase for several laps, Malcolm used his skills on the whoop section to catch and pass for the lead, only to lose his rhythm and double the triple jump, which slowed him down. By the end of the heat race he had dropped back to third place, due to another error, which allowed Cole Seeley, also on a Honda, to pass him.

In the main event, Ken Roczen would take the early lead while Justin Hill would crash and spend the whole race fighting his way back to the 13th spot. Musquin took second place on that first lap, with Blake Blagett in third, with Jason Anderson putting pressure on them from behind. Eli Tomac was right in that pack as well, until making a mistake and dropping back to ninth. Malcolm Stewart was just overtaking Vince Friese for the fifth spot, with Tomac right behind him when he went down hard in the whoops, the bike throwing him over the bars, before bouncing end over end.

Eventually, once Malcolm was carried off the course on a back board, the riders would line up in single file and finish the race. With just a few laps to go, a hard charging Blake Blaggett on a KTM would pass Jason Anderson on a Husqvarna, and stay out front to take the checkered. Roczen had gone down while being passed by Anderson for the lead after the restart, but managed to pick it up and finish in third.

Knowing how hard these young riders train, Malcolm has got to be healthy and in top physical condition, but reports are that his femur is broken, and that is not something you get over in a few weeks. There is no official word, but we assume he is out for the rest of the 2019 Supercross season. Malcolm posted to his Instagram account this morning from the hospital, saying sorry to his fans for letting them down. Broken or not, he remains one of the coolest riders in the sport.