HomeArticlesRiding On the Wrong Side

Watch This Rider Escape Death Only To Crash Anyway 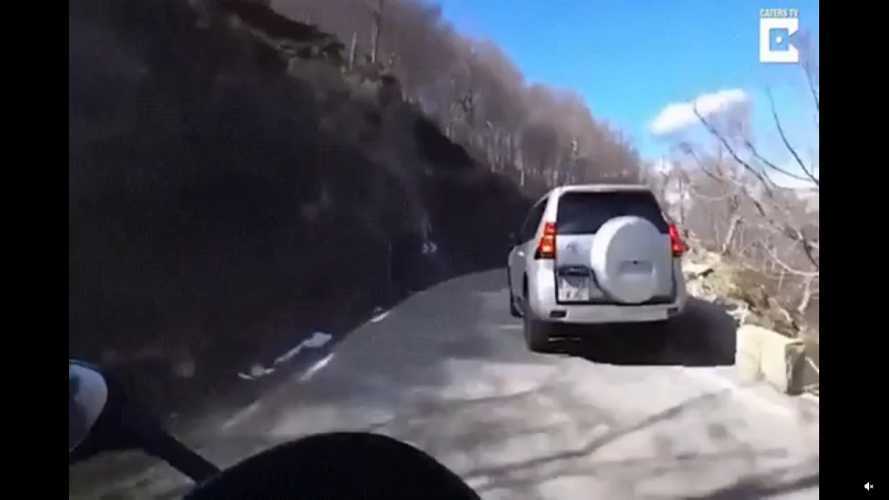 Warning: Don't ever do this.

Most of us would be lying if we said we've never passed a slow-moving car under questionable, not entirely legal conditions. A motorcycle's small size and impressive acceleration allow us to get away with a bit more when it comes to passing. As a great philosopher once said, "With great power comes great responsibility," and the rider in this video doesn't take that responsibility seriously.

This particularly enthusiastic sportbike rider is clearly enjoying a spirited ride down a mountain road. He begins by passing a bus, which is nearly as wide as the road, on a short straightaway into a blind corner. That's not a good idea. If an oncoming car had come around that corner, the bike would have nowhere to go, with disastrous consequences. He gets away with it, though, and keeps up the pace.

He catches and passes three cars under similarly dubious circumstances, with poor sightlines to spot oncoming traffic. Again and again, his luck holds out through all these passes. As the video is titled, he could not have chosen a better road to pass people on. The fact that there was no oncoming traffic is what saved him from his excessively aggressive passing.

Finally, his luck suddenly runs out. Ironically it's not traffic that catches him out, but a simple loss of traction, some sand, perhaps. While entering a left-hand sweeper, the back wheel appears to skid out from under the bike, causing a low-side crash where both bike and rider go tumbling down the embankment off the side of the road. The rider appears to be okay, though, since the video continues by showing his wrecked bike and just how far down the hill they fell.

It's fun to indulge yourself on twisty back roads, but it's important not to take unnecessary risks. This guy got away with four of them, one for every time he passed a car around a blind corner. The final risk, entering a corner without reading the road surface properly for hazards, is what finally did him in. He's lucky this didn't happen around another corner that had large stone walls on the outside, which would've made his day even worse.