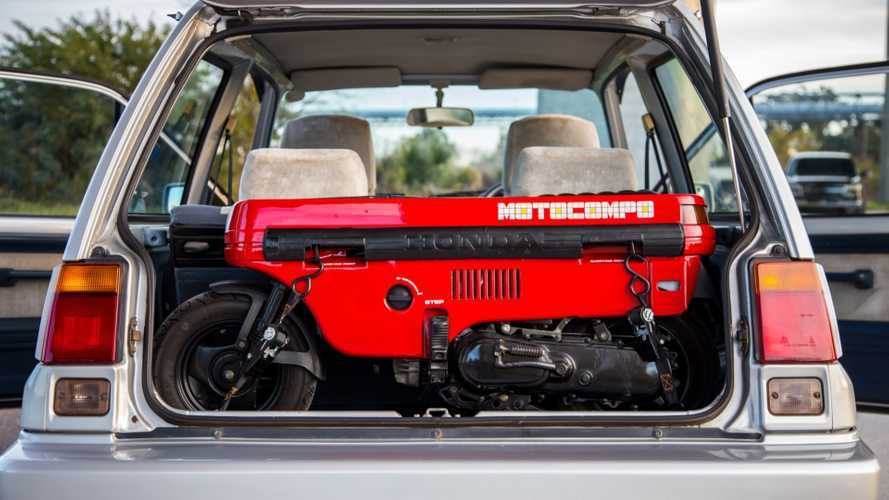 Most people say the car comes with the bike, but we see it differently.

In early 1980s Japan, you could buy a Honda City hatchback that came with a tiny scooter, the Motocompo, that folded up and fit in the back of the car. These were never sold in the U.S. but they have become old enough to import from Japan. It's still rare to find a package deal including both the car and the scooter, but one has just popped up on Bring A Trailer.

Is This Quirky Honda Scooter Coming to Europe?

The car in question is a 1983 Honda City Turbo II, a tiny car with a turbo 1.2-liter engine and 5-speed manual transmission. It's a neat little car, but RideApart is more interested in motorcycles, so let's talk about the Motocompo.

Honda designed the Motocompo as an accessory to the City, as well as the Honda Today kei car. The little scooter folds up into a rectangular block to fit inside the rear hatch area of these cars, which comes complete with the appropriate tie-down straps, enabling you to take a bike anywhere you go with no need for a trailer or rack. Its 2-stroke 49cc engine makes a whopping 2.5 horsepower at 5,000 RPM, which is still enough to putt around the city and get into places that even a tiny car like the City might not be able to reach.

It's unusual to find a City and Motocompo that haven't been separated over the years, and particularly rare in the U.S. This particular pair found its way to Florida through a dealer last year. The bike was originally white, but the importing dealer refinished it in red and applied new white and yellow decals to reproduce the factory look. Both the car and bike have been through the official import process and are fully street legal, though the Motocompo only comes with a bill of sale since a title is not required for bikes 49cc and below in Florida.

At the time of this writing, the price is currently $12,000 with six days left in the auction. This is no doubt a whole lot more than the package originally sold for in Japan, but its rarity and uniqueness in the U.S. make it valuable. It's likely out of most enthusiasts' price range, but at least we can drool over the pictures on the website.