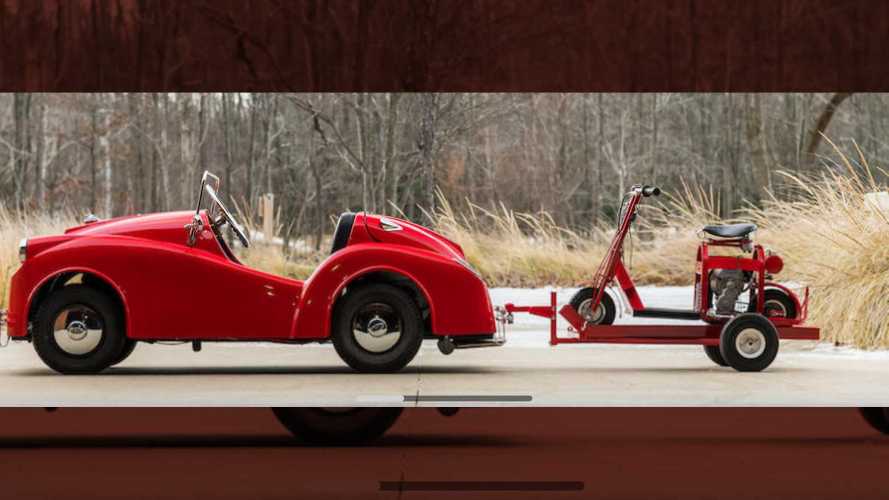 Both are powered by Cushman Husky engines.

We've featured some pretty impressive, high price tag items up for auction at Bonhams. And now for something completely different: a tiny car towing a tiny scooter, each using the same Cushman engines.

Much of what we've featured has been for its rarity or historical significance. This one, it's just completely adorable. That's a 1946 Cushman Husky Model 53A scooter on the trailer. You may not have heard of this scooter, but plenty of soldiers during World War II did as it saw extensive use in the war. It's so small it was sometimes dropped by parachute to soldiers who needed them. Production continued after the war until the early 1960s.

The car is a custom job. It started its life as part of a carousel ride. The amusement park attraction later gained a steel frame and a rear-mounted Cushman engine—the same engine as the scooter. It's suspected that the car, or perhaps the car and scooter combo, may have been driven by Shriners during their wacky parade stunt shows. Fortunately, no signs of abuse from these driving conditions appear on either vehicle or the trailer.

Most items at Bonhams sell for extremely high prices. But here, you can get the car, the scooter, and a trailer to tow it for an expected selling price between $5,000 and $6,000. They're not street legal, of course, but who cares? They're so cool you can rip them around your yard, separately or together. You can practice Knight Rider style entrances and exits from the trailer while in motion. You can even enter it in a parade and drive it around in circles. If so, do as the Shriners do and wear a fez. Fezzes are cool.