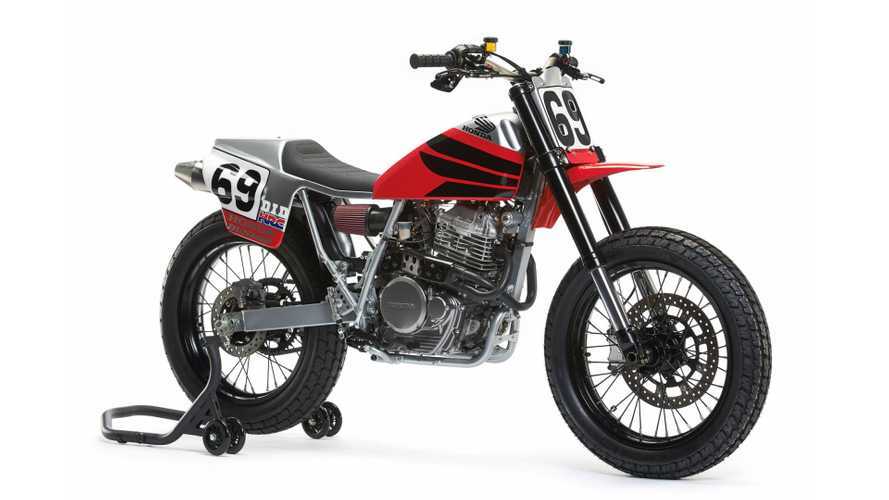 The customizer built two rather different bikes to honor the fallen rider.

The late, great Nicky Hayden was a force to be reckoned with in MotoGP and the Superbike World Championships. Ultimately it was a bicycle crash that cut his life short, as well as his illustrious racing career. Honda and the American Motorcyclist Association commissioned customizer Analog Motorcycles to build two Nicky Hayden tribute bikes to honor Hayden, as well as a fundraiser.

One of these bikes would be a Honda CBR1000RR covered in Hayden's famous Repsol MotoGP livery, an appropriate if predictable choice. The second bike was left to Analog's discretion to design and build. Analog's Tony Prust decided to go all the way back to Hayden's roots as a flat track racer, choosing an XR650L to be the donor bike, painted in Hayden's AMA 2002 Championship RC51 livery.

There aren't very many flat-tracker XR650Ls, so Analog was forced to fabricate more of its own parts for the build than expected. The bike got a new fuel tank, shaped rather like the Harley-Davidson XR750 for its looks. It also has a custom tail section that includes a sneaky fender extension protruding from its flat-tracker rear end, complete with integrated number plates that wrap around the exhaust. Since this bike had to be street legal, small headlights were integrated into the front number plate, with a subtle LED tail light strip in back.

The bike isn't just a looker, either. It gained a custom-built Hyperpro shock in back, with a KTM 690 Enduro front end rebuilt to suit the Honda. The 19-inch wheels are correct for flat-track racing and wrapped in Dunlop DT3 tires. For power, the massive emissions system was removed and a Keihin FCR41 carburetor was added. It has a custom intake with a K&N filter, modified and ceramic coated headers, and a Cone Engineering muffler. Magura handlebars and master cylinders were used, with the clutch converted to hydraulic as well.

U.S. residents can enter to win either of these Nicky Hayden tribute bikes on the AMA website. Tickets are as little as $5 a piece to own a piece of racing history.