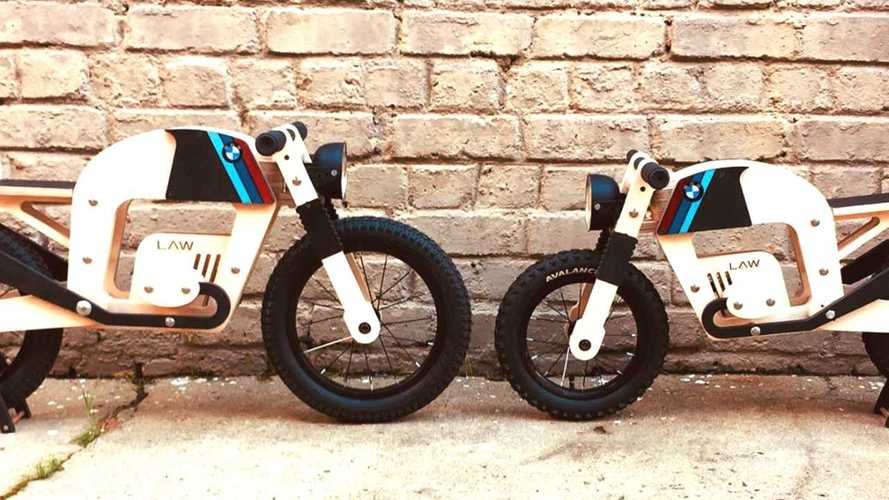 Sorry, you'll have to go to South Africa to get one. For now.

We don't have to tell you that the weather outside is frightful, and we're all spending more time in the garage on projects than out on the road. Johann de Wet down in South Africa, during some downtime, decided to create a custom strider balance bike for his daughter to matched his BMW. After making a few Bimmers he took a hard look at a modern Triumph Bonneville and adapted that look to his strider design. With that Lawless Bikes was born.

MORE FOR THE KIDS

This being the 21st-century, Johann didn't just sketch his ideas out on some plywood and build one bike. Using computers and CNC technology, Johann set himself up to be able to produce multiples of his design, edit it, scale it, whatever. The wheels and tires are the same basic units you'd find on any little kid's bike, but the rest of the bike is cut from thick sheets of birch plywood and bolted together. Add some custom paint, leather upholstery, and "Lawless" badges and away the little ones roll.

So far, there are only a few dozen Lawless balance bikes out there, since Johann has a good full time job and this is a side project, but they are all over the internet. Also, except for one that was sent to Europe, there is no system or plan set up to export them, and no way to order them from the United States (you can message then and beg via their Facebook page). From a July Facebook post on the Lawless page, they are investigating export options, but so far only take orders from South Africa.

Only because of that, if you want one I'd suggest you take a good long look at their design and draw up your own plans. If you've got kids, or just want a neat looking bike for display, get yourself a good thick piece of plywood and a bandsaw and start working. You'll need a pair of wheels, but tiny kid bikes are often next to free on Craigslist, at your local thrift shop, and at garage sales. The only thing I would add to the basic Lawless design would be a pair of struts to the swingarm simulating rear shocks and supporting the back end.

If you do build one, or have already built something similar, drop a picture of it in the comments.