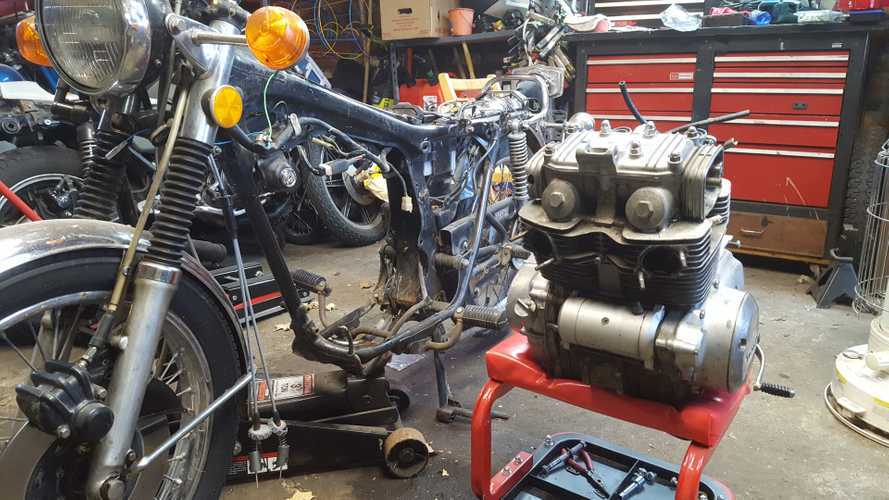 Wherein a little know-how, a little elbow grease, and a whole lot of Shiner Bock go a long way.

It's back! After a two month-ish period of downtime wherein I scrounged around for parts, dealt with garage renovations, tried desperately to make time in my schedule, the junkpile Honda CB200 is back and better than ever!

When we last saw the Small Bike Rescue CB200, I'd just discovered a breathtaking previous owner bodge that involved the camshaft, a generic Chinesium bearing, and a bench grinder. It was so bad that the project ground to a halt as I searched the internet for parts. Used OEM camshafts were going for upwards of $300 Yankee dollars on eBay and I definitely didn't want to pay that. Thankfully, our man Todd found me a whole new (well, new to me) CB200 head complete with valves, springs, camshaft, timing gear cog, points and tach boxes, etc. Now we were in business.

Over the course of the next couple weeks, I put the engine back together in fits and starts. I installed all new gaskets in the top end, gave the cylinders a quickie hone with one of those Flex-Hone dingleball thingies, and slapped everything together with some new hardware. I also used about half a bottle of assembly lube on the ends of the camshaft to make damn sure they didn't seize up once I started the engine.

Once everything was buttoned up, I spent a couple days on and off wrestling the engine back into the frame, getting everything plugged back in, changing the oil, and generally preparing it for its first start. How did it go, you ask? Well...

Pretty great, right? It's running super lean without the airboxes on, and it desperately needs a set of pipes—I have a nice set of generic slip-ons that Todd gave me to replace the super rusted OEM pipes I sawed off—but it runs and it's awesome.

Having it start and run after the top-end rebuild is a huge relief, and with that done I can finally see the finish line. I need to get the airboxes back on, mount the pipes, replace the headlight, dial in the carbs and the timing a little more, and do a few little odds and ends. Then it'll be ready for storage. Once that's done I can finally get started on the '72 CB450 I picked up, which you'll see here very soon.