Check Out This Rob North Triumph Trident For Sale 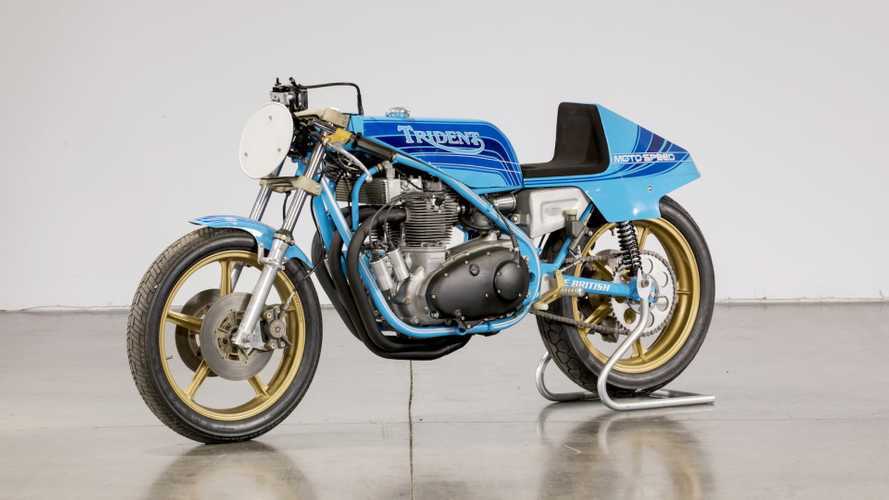 The Triumph Trident dominated racing in the early 1970s.

In 1968, Triumph and BSA, which had recently merged, introduced the first of their iconic three-cylinder motorcycles. The Trident and Rocket 3 were essentially the same bikes with different branding, though only the Rocket 3 lives on today under the Triumph badge. Triumph decided to take its triple racing, and this bike was the result.

THREE IS BETTER THAN TWO

Having extracted 90 horsepower out of the 750cc triple, which was a lot for the time, Triumph designer Doug Hele looked up independent frame builder Rob North to wrap a racing frame around his engine. What he designed was rather unusual, with the top tubes wrapping around the sides of the engine to connect the steering head directly to the swingarm pivot. The end result was an extremely successful racing motorcycle, sweeping the podium at the 1971 Daytona 200. It continued its dominance of numerous races through 1973 when Triumph pulled the plug on racing due to financial trouble at the company.

This particular bike, which will be up for auction in January, is not one of those bikes. Rather, Swede Maurizio Olivetti built it in 1978, using the same formula of a Triumph triple in a Rob North frame. North kept producing these frames after Triumph stopped racing. His company, under different ownership, still builds them today for vintage Formula 750 racers. Olivetti raced this bike himself a few times but considered himself more of a builder than a racer and sold it soon after. It found its way into the Motorcycle Collection of Stockholm in 2010. It is from there that it goes up for auction next month.

Though it's not one of Triumph's original racers, this particular bike has a rich history of its own, particularly its Swedish rather than British roots. The Motorcycle Collection of Stockholm feels that it is the most famous Swedish racing motorcycle of its era, which is why it added this bike to its collection. Now it can be yours if the price is right.