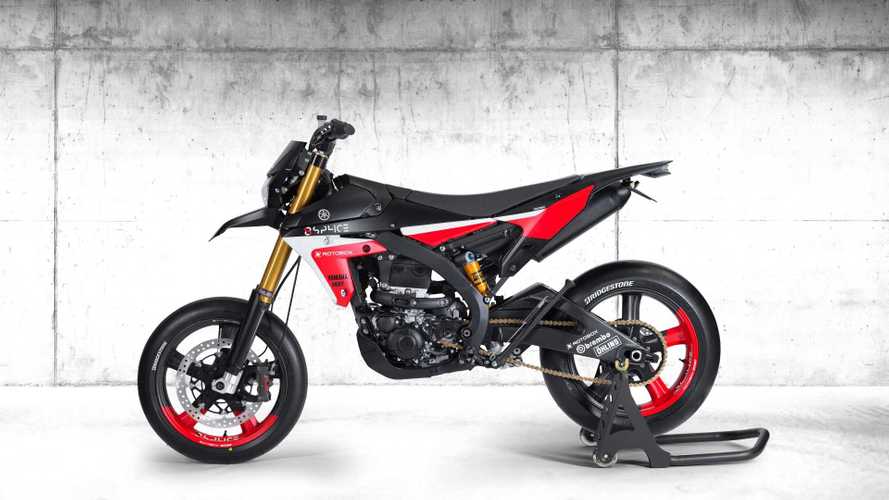 Rotobox has introduced the Splice, a lightweight and expensive supermoto.

Carbon fiber is a wonderful thing. It's lightweight, strong, and is finding more and more practical applications these days. Rotobox has been around for a while making carbon fiber motorcycle wheels. Now the company has introduced its own complete motorcycle.

Well, sort of. Rather than building an original bike from the ground up, Rotobox has taken Yamaha's WR450F dual-sport and transformed it into a unique track-oriented supermoto it calls the Splice. Actually, Yamaha's 450cc and 250cc engines are both available, since the WR250F, as well as the YZ250F and YZ450F, can all be used as donor platforms.

Rotobox replaces the rear swingarm with a modified one originally intended for the R6. This also allows a 190-width rear tire to be added along with, of course, Rotobox Boost carbon fiber wheels. Rotobox also designed the sprockets, triple clamps, and bodywork to give the Splice its own unique look and further modify it for performance on the track. An Ohlins supermoto suspension (FG461 up front, TTX Flow out back) optimizes the handling for pavement rather than dirt, and Brembo brakes bring it to a stop.

It's not just carbon fiber for Rotobox anymore. Some components are made of other materials, like the 3-D printed plastic front and rear fenders. The seat, fairings, and instrument holder are Rotobox's unique designs as well, though the cluster itself is still Yamaha's. Although based on a Yamaha dirt bike, you'd never recognize the Splice's origins if it didn't still feature Yamaha logos and badging.

There's only one hitch about this Slovenian wonder. It costs more than $40,000. That's a lot of coin when you can snag a new Husqvarna 701 Supermoto for $11,300, or pick up some cheap, used dual-sport and throw some road tires on yourself. You certainly get what you pay for with the Splice, but the question is how many people will actually pony up that kind of cash.