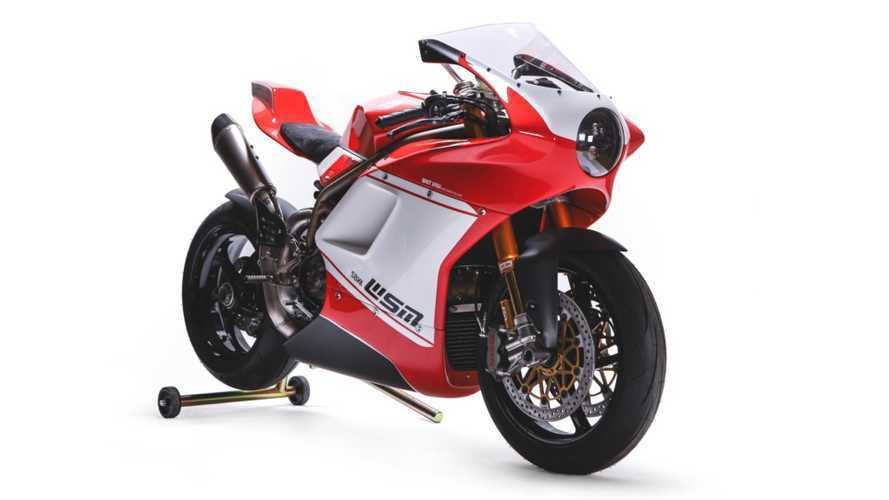 Have you ever wanted a racing superbike you could ride on the street? Walt Siegl Motorcycles, the New Hampshire creator of hand-built, Ducati-powered motorcycles, has provided just what you're looking for, appropriately named the SBK.

WSM's previous models have exclusively used Ducati's two-valve air-cooled engines. The SBK is available not only with this engine but also Ducati's four-valve water-cooled engine. It's an entirely new bike made to accommodate both engines while retaining the classic Ducati perimeter frame design. Its geometry is identical to the World Superbike frames, which are different than stock. With Ohlins FGR World Superbike forks and an Ohlins TTX shock valved to WSM's specifications, it's easy to adjust the SBK from being a sporty street bike to an ultra-responsive track bike. Brembo Monobloc calipers, Brembo 330mm front rotors, and Spiegler Performance brake lines bring the SBK to a quick safe stop.

Both engine choices are based on the Ducati 1098 engine and built up by Bruce Meyers Performance. It features custom electronic engine management by WSM, including traction control, clutchless upshift, and a full interface dashboard with data acquisition.

Aside from the engine, there are a few minor differences between the air-cooled and water-cooled models. The water-cooled SBK gets OZ Racing wheels with Dunlop Q4 tires and an SC Project muffler and weighs just 355 pounds. The air-cooled version gets BST carbon fiber wheels wrapped in Metzeler racing slicks and Arrow titanium mufflers and weighs 340 pounds thanks to not having the water cooling system. No horsepower figures are provided, but whichever way you go, you'll get a premium, hand-made, high-performance motorcycle.