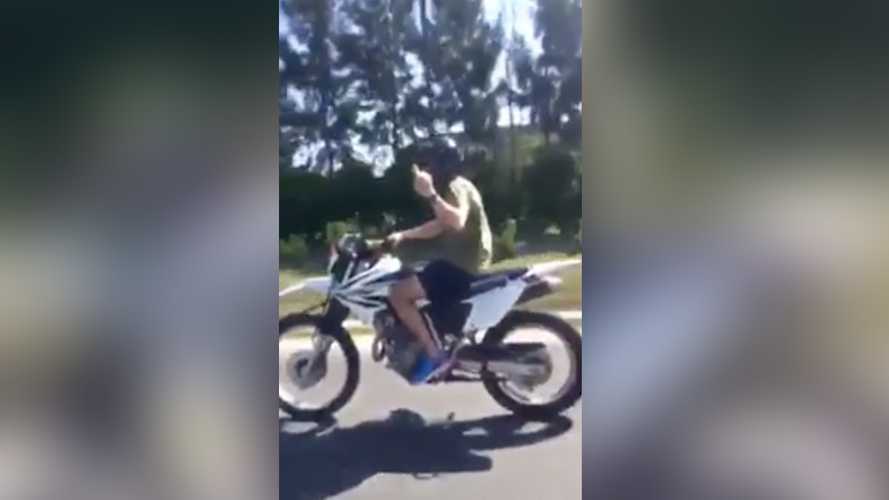 This could be considered a case of instant karma.

Some say that a man reaps what he sows. That saying appears to be true in this brief video clip of a rider crashing himself after making a rude gesture at the camera.

MY KARMA RAN OVER MY DOGMA

We all know it's illegal to ride a dirt bike on public roads. It happens anyway, and some people aren't happy about that. We don't know what happened before the video, shot from a passing car, begins. We can't be sure if its occupants were taunting the rider in some way, such as honking or yelling. What we do know is a dirt bike is riding down the road next to the car as the video begins. The rider promptly shows the occupants his middle finger. After putting both hands back on the handlebars, he stands up and bounces the front a few times, presumably for a wheelie. Just as he prepares to lift his front wheel off the ground to show everyone how awesome he is, the bike promptly drops to the pavement, resulting in precisely the opposite effect.

(We apologize for the portrait-format video. We know it's an unforgivable sin.)

As best as we can tell, the rider's right hand slipped off the throttle at the exact moment he tried to pull up on the handlebars to launch into his awe-inspiring wheelie. As a result, his firmly planted left hand yanked on the handlebar all by itself, turning the front wheel abruptly and causing an awe-inspiring spill instead. I'm no expert on wheelies, but I've never seen anyone use multiple bounces on the front suspension to help lift the front wheel into the air, so his technique was somewhat suspect as well.

I can never wish a crash on a fellow rider. In this case, however, I can snicker and say that based on his behavior he got what was coming to him.