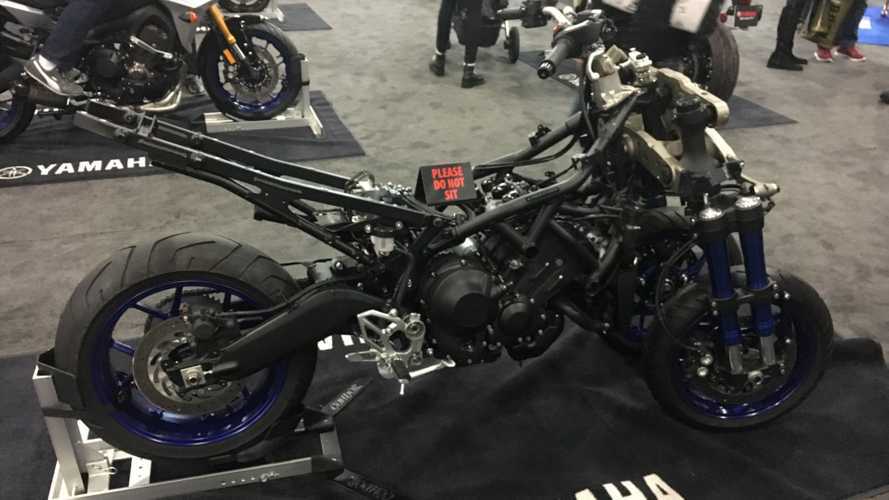 They took the covers off the Niken so we can see exactly how it works.

The Yamaha Niken is an unusual new offering in the sport touring category. It has an unconventional setup of two wheels in the front with one in the back, yet its unique suspension still allows the bike to tilt and lean like a normal two-wheeled motorcycle. I've been curious exactly how this system worked. At the New York IMS, Yamaha took the Niken's clothes off to show off its naked body, including its fascinating steering system.

From the steering head back, the Niken looks much like any other sport touring motorcycle. Under the covers lies its 847cc inline-3 cylinder engine, painted black rather than anything flashy. The frame, swingarm, and all of the other hardware look strictly conventional. That's not what you want to read about. You want to know about the Niken's trick steering. So here it is.

Your steering inputs go through many components to steer the bike. When you turn the handlebars, a rod transfers that motion to a second head further forward. This, in turn, moves a pair of swingarms to control the lean angle. That's not all, though. This linkage also attaches to a steering rod even farther forward. The rod acts similarly to a car's steering rack, attaching essentially to a ball joint at the top and forward of each fork. As the linkage turns, so does the steering angle of the two front wheels.

In practice, the system appears to duplicate the movement of your initial turn-in briefly leaning the bike away from the direction of the turn to initiate it, which the steering of the front wheel(s) soon corrects to a lean into the turn. This means that no special riding techniques should be necessary for the Niken, since it works with what you already (should) know. The front suspension has a large range of travel to enable nearly 45 degrees of lean angle while both front wheels maintain contact with the ground.

Plus, you gain the advantages of two front contact patches rather than one. That means better traction for turning, and more braking power through twice as much rubber on the road. I sat on a fully clothed Niken GT and was surprised to see that the unusually wide gas tank completely obscured my view of the front wheels, unlike the Tilting Motor Works Harley I tested. I haven't had the chance to actually ride the Niken yet, but the Yamaha representative I spoke with told me that the only differences they notice between the Niken and other sport touring bikes is the added precision and control in the front. In all other ways, it rides exactly like a two-wheeler.

I'd still like to be the judge of that for myself, but I admit that it sounds promising. I'm also quite impressed with the quality of the sophisticated steering system. If it works as well as it looks, it should be quite the performer. The only remaining question is whether riders will actually buy it.