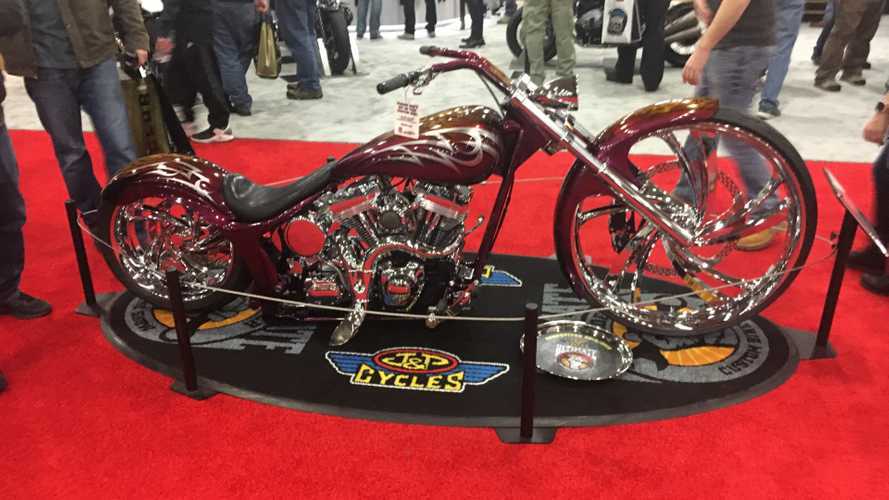 The Javits Center in New York City was home to the International Motorcycle Show this past weekend. I'd never been, but I figured that since I'm writing about motorcycles these days I should go, so I snagged a seat on the Yankee Beemers bus and made a day trip out of it. Although I was welcome to attend the press event on Friday, I went on Saturday, which was a normal day open to the public.

Indian Motorcycle Gears Up for IMS

As is to be expected, most of the major motorcycle manufacturers were there. Notable among the absent were KTM and Moto Guzzi. After a previous absence, Triumph was back, to the pleasure of many. I've been wanting to get my butt on a Speed Triple for a while. It was great, but it didn't fit my body as well as the Yamaha MT-09, which fits like a glove. The Bobber, which is a style I typically don't care for, actually appealed to me with its riding position and wide, comfy seat. I'm beginning to understand the appeal, at least if you never need to carry a passenger.

Royal Enfield was right next door, showing the Classic 500 as well as the new twins. The INT650 felt much heavier than I expected, which was surprising for a twin. Its feel and riding position closely emulated the 1980s Japanese bikes I grew up riding. The Continental, with the same running gear, didn't have this problem, with a sportier, forward riding position. The Himalayan felt quite comfortable, and despite being much larger than the INT650 it actually felt lighter. I could see taking this bike anywhere, on or off-road.

Suzuki had the new Katana on display, though without the extravagant sideshow of Long Beach. It was right next to an original Katana, and the resemblance is striking. Suzuki really nailed recapturing the lines and looks of the original in its recreation. Other notable (to me) Suzukis were the DRZ400SM, which made me feel like a hooligan motovlogger, and the Boulevard S40, which has barely changed since its introduction as the LS650 Savage in 1986. Still, it's a decent small bike (I own both 2001 runner and a 1986 parts bike for my wife), so I choose to look at it more as not messing with success rather than laziness on designing a replacement.

I sat on a Vespa. I felt like Deadpool.

Indian had a significant presence, and rightly so. All of its bikes were there, and I found the Scout quite comfortable. I'd like to get one of these out on an extended ride sometime. But the big news at Indian is the FTR1200, which was here in the flesh. I want one. I wasn't so hot on its huge rectangular exhaust system when I saw it in photos, but it's growing on me in real life. Also, Indian offers an optional Akrapovic exhaust that looks a bit more conventional, which I'd probably opt for. The riding position is perfect, sporty yet perfectly comfortable. It fits me even better than the MT-09. Out of all the bikes at the show, this is one I'd be most likely to own myself. Not in a million years did I ever imagine myself saying that about an Indian, until now.

Of course, Harley-Davidson's booth was a sprawling metropolis, which is the only way to show its wide selection of models. The FXDR 114, as beautiful as it is, really doesn't work for me. The drag-inspired intake sticking out the side of the engine hits my right leg, which would become uncomfortable quickly. Don't worry, though—Harley's catalog is literally the size of a phone book, and you can find any parts and accessories you want, including a different intake, in there. But that still wouldn't fix my lower back discomfort on the FXDR, since my upper body is too stretched from its long reach. I don't have this problem with most Harleys, though. I've put 500 miles on a Street Glide in two days in perfect comfort.

The Street 750 surprised me. It didn't feel like a traditional Harley at all. Between the mid-forward foot controls and the single turn signal switch on the left like most bikes, it felt more the UJMs I grew up on than a Harley-Davidson. If this is Harley's effort to attract younger riders, it's a good start. It doesn't go far enough, though. Look at Indian's FTR1200 as proof. The Street series is good, but it isn't exciting. That's what I think Harley needs to introduce to the lineup to really appeal to "the youths."

BMW had the new S1000RR on display. You couldn't touch it, but you could certainly appreciate it. The R nine T has a very weird name. It's a very flexible design, however. BMW had five versions on display, ranging from cafe racer to scrambler to adventure bike. Strangely enough, they all worked. The riding positions were completely different, each tailored specifically to that bike's purpose. It was hard to tell that they were all based on the same basic bike. Incidentally, Nostalgia was there with its R7 Art Deco-inspired bike based on the R nine T. It looks stunning in pictures and even better in real life.

Over at Honda, I had to try the Monkey. I'm a big Grom fan, and I wanted to see how the Monkey compared. It's soft, wide, and has much more suspension travel than the Grom. Its intention seems quite clear: to be a cool looking retro bike to cruise around on. The Grom feels much sportier in comparison and is the superior riding enthusiast's bike. Though I like the Monkey's looks, I'd still have the Grom for myself.

The new Goldwing has gone on a diet compared to previous models. Sitting on it, it felt more like an updated PC800 than the car-on-wheels that the Goldwing used to be. It feels much lighter and easier to maneuver than previous models while preserving the features and comfort that Goldwing owners have come to expect. We'll have to see if long-time Goldwing riders take to the newer smaller version.

Yamaha had the Niken on display. Stay tuned for a complete look at it, inside and out. There was also a cool cutaway R1M to give us a look at what makes it tick.

Over at Kawasaki I finally sat on the Ninja H2. The vibe I got from it was "More than you can afford, pal." Moving onto the Z400, it looks like it will be everything we hoped it would be, essentially a naked Ninja 400. My only personal problem with the bike was that the back of the gas tank protruded too far into my gentleman's region, which would make riding it rather uncomfortable for me.

It's not just about the bikes at IMS, either. Numerous manufacturers of all kinds are on hand to show you tires, batteries, windshields, helmets, and other riding gear. You can have custom earplugs made on-site. You can find pretty much any patch you can imagine, and even a few that you can't. Several events, such as Laconia and Americade, have booths to try and draw attendees. So do a number of motorcycle clubs. The funniest thing I saw all weekend was the Christian Motorcyclists Association and the Hell's Angels practically a booth away from each other.

Overall, I'm glad I went to IMS. It was a great opportunity for me to boost my knowledge of new motorcycles since I tend to gravitate toward older ones. Similarly, if you're looking for a new bike, IMS is where you can sit on many models back-to-back to see which one fits you well. I had high hopes for the Triumph Speed Triple, but the Yamaha MT-09 just fit me better. So did the Indian FTR1200. That's actually my biggest problem with IMS. Now there are about 20 more bikes that I want to buy.

To check it out for yourself, check the IMS website and look up the shows in Dallas, Cleveland, Minneapolis, DC, and Chicago.