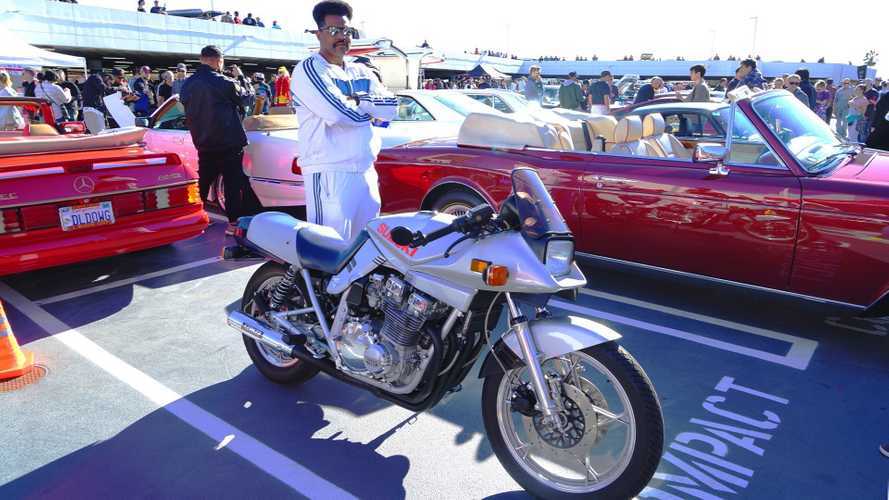 Dress in your best Jinco jeans and tease your hair up big!

In only the second year, RadWood (no relation) has definitely caught on, and with each show more and more bikes, cars, and fashionably dressed show up to celebrate the last few decades of the 20th-century. Created in reaction to the typical car/bike show culture, RadWood is the brainchild of Bradley Brownell, the folks from Driving While Awesome, and several other car bloggers/podcasters/journalists. These younger generation guys just did not feel the nostalgia for 1957 Chevys, 1964 Mustangs, Harley Knuckleheads, or Triumph Bonnevilles, because they grew up with Fox Body Mustangs, and air/oil cooled Suzuki GSX-Rs, needless to say they were also sick of Hawaiian shirts and golden oldies.

And so the idea was hatched to create a show for the next generation of motorhead, those of us who were more into Initial D and Outrun than we were Elvis and The Wild One. DJs spin the hottest 80s one hit wonders and back in the day hip-hop tracks for break dancers to bust a move to, while skateboard and BMX freestyle demonstrations go on in one corner of the show. Show cars some tricked out with period built in phones, vintage accessories, and huge boom boxes, also playing out period hits. There is not a single creepy crying little kid doll to be seen for miles

Period dress is listed on the poster and website as "compulsory" though you will still be allowed in if you wear your 21st-century finest. Vans, Converse All-Stars, and vintage Air Jordans are very popular, as are big hair and side pony tails. Colors tend toward pastels and day glow, with Benetton, Guess, Bugle Boy, and even the more preppy Izod brands represented. And then, of course, the matching track suit never really went out of style. Some folks really are dedicated, growing actual mullets, or getting their afros done up in a flat top that would make Kid n' Play proud, while others take the easy way out with a vintage painter style hat from Ocean Pacific. Even the dogs get in on the act.

The bikes in these images are pretty much all that was there, so RadWood needs more bikes, and many bikes from the 1980-1999 vintage are real bargains. Obviously these people are not paid models, but just random show attendees whom I roped into posing with the bikes because their outfits were so great.

The next official RadWood show is in Austin, TX in February, then Sonoma, CA (Sears Point) in March. You can see the entire schedule here, and start your shopping for a Honda Elite 150 scooter, or Smoking Joe Camel Edition CBR600F3.