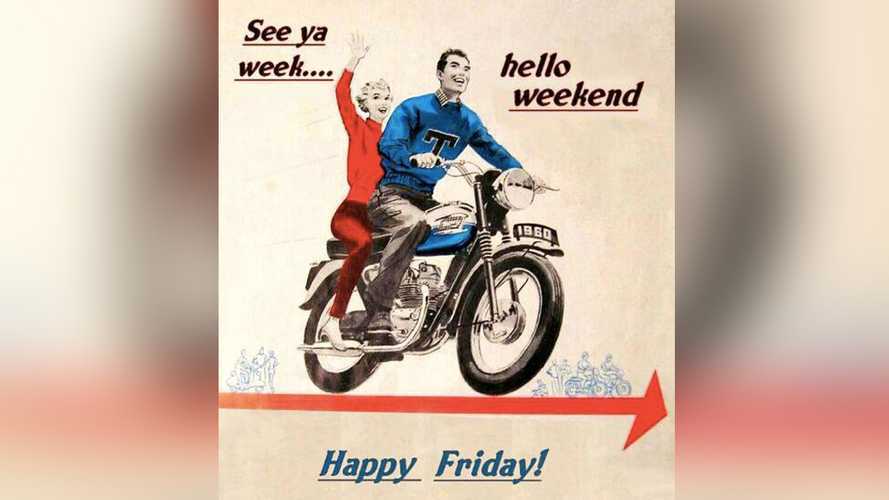 It’s Friday and let’s all be honest about it: nobody here really feels like working. The prospect of the weekend being only hours away is way too distracting for us to feel like doing anything relevant. We figured you probably feel the same way and since we’re all in agreement, we thought we’d oblige and wrap the week up with something on the lighter side of things—like, really light—and we want to make an actual out of it. But we need a name. We’re pretty darn creative, but we’re curious to see what you guys think a Friday series about fluff should be named. In the meantime, we’re starting things off with a wonder of sights and sounds—brace your retinas and enjoy the ride.

For the record, I tried, but swear words don’t fly. Admit it, “The Friday F*Off” has a ring to it. Until we do find an “appropriate” name for our series, since today is Friday, we thought we’d get the ball rolling and I’m the lucky chicken dinner winner who gets to go first. Prepare to feast your eyes and your ears on the video I’m sharing with you this week! I give you Terry Crews riding a CBR1100XX in a digital neon 80s extravaganza to the electronic sound of Muse.

When I found this jewel in the fiery pits of Reddit, it made the world a little better. If I’m going to be honest, I’ve never been much of a Muse fan, but somehow this song taps into my 80s-loving sensitivity. The entire video is an LSD-induced clustermess of I don’t-know-what in which our buddy Terry Crews is going into hacker mode to merge his DNA with that of a purple Furby look-alike before jumping in the saddle of the Super Blackbird to conquer a video game in a neon light delight. It’s nonsensical and it’s glorious. It hurts my eyes a little bit, but I can’t look away.

The bike The Crews rides on has been recognized by some users as a Honda CBR1100XX Super Blackbird, a model that became the fastest production motorcycle in the world, snatching the title from the Kawasaki Ninja ZX-11, before Suzuki retaliated with the Hayabusa. If you’re going for a ride in the Matrix, you might as well jump on something fast-ish—I guess a top speed of 188 mph (officially 178 according to the record) is a respectable number for a late 90s-early 2000s model.

They say you shouldn’t look directly at an eclipse, but somehow there’s never been a socially-embraced caution about too much neon lights and colors. Stop watching if your eyes start stinging a little. I hope this trip to the digital land of what-the-hell made you as happy as it made me. I’m all for sharing in the joy. Share your fluff away and don’t forget to throw your ideas at us. If your title is picked, we’ll thank you publicly and give you bragging rights which is at least worth $50 in Monopoly money.