UPDATE: Turns Out This Cool Vincent Lawn Mower Might Be Hot 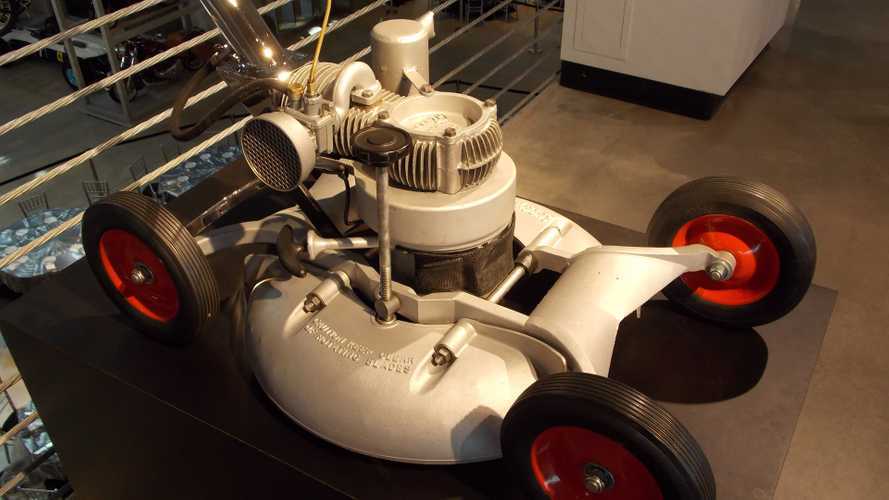 I wrote about this rad Vincent-powered lawn mower last week, thinking it'd just be a neat look at an evolutionary dead-end from a legendary motorcycle maker. It was definitely that, but it turns out that it's so, so much more.

The mower that I based the article on, this fine machine right here, was listed on eBay by a seller way down in Mississippi. Over the weekend, I received an email containing some pretty compelling evidence showing that the machine in question was stolen out of Chicago some years back. The email was from a member of the Vincent H.R.D. Owners Club, and it included a screen capture of a post on the club's Facebook page detailing laying out evidence that the mower in the eBay listing was stolen.

The story goes like this. A while back a Vincent-powered Rapier lawn mower was stolen from a guy named Glenn Shriver, a Vincent H.R.D.O.C. member out of Chicago. Shriver's mower turned up in around 2015 in San Francisco on a blog published by a custom bike house out there. Shriver got 'hold of the guy who claimed to own the Vincent mower—a dude with a Chicago number, by the way—but he and the mower disappeared after a few emails and the trail went dead. Now, three-ish years later, this mower turns up in Mississippi and it sure looks like Shriver's machine. So, how do they know that the machine on eBay is Shriver's?

Turns out, Shriver and his mower were featured in a Vincent Buyer's Guide published way, way back in 1994.

"The tale tells on the machine are the braided fuel line with in-line filter, clearly visible in the eBay photos and seen on the top-left of the engine photo from the book," wrote Vincent H.R.D. Owners Club member Glenn Bewley on the group's Facebook page. "In addition, it is equipped with a Monza gas cap a the top of the steering bar which is the fuel tank."

I went back to check the eBay listing to find that the seller had pulled the listing and left this note,

"I was just informed that this item was reported stolen by an individual in Chicago some years ago.  I am ending this auction to perform due diligence on this piece to find out exactly what is going on here..... "

Now, none of this is airtight evidence and it's not an open and shut case by any means. It'd be better if Shriver had his mower's VIN recorded somewhere, which he might but it hasn't been mentioned yet. It does look like the Rapier in Mississippi is Shriver's stolen machine, though. The eBay seller seems to be doing the right thing, which is nice, so let's hope this all has a happy ending one way or another.

I'll update this again once we learn more.

The early-to-mid-50s was a pretty dire time for the British Motorcycle industry. The country was broke, its people were poor, everything was rationed, and the shaky post-war economy demanded small, cheap, efficient motorcycles like the BSA Bantam instead of, say, the stonking great V-twins produced by Vincent. By 1956, Vincent was out of the motorcycle business and was reduced to building 50cc and 75cc two-stroke industrial engines—along with selling Vincent-badged imported NSU bikes—just to stay afloat. The mighty had surely fallen. Those tiny Vincent oil burners found their way into a variety of machines, including the subject of today's Cycleweird—the Rapier Rotary Lawn Mower.

The Rapier was built by Farmfitters, a power equipment firm out of Gerrards Cross, Buckinghamshire, UK throughout the 50s and 60s. Surprisingly innovative for a simple mower, the Rapier sported features like a two-piece, cast aluminum deck (which was both beautiful and expensive to make) and a long tubular fuel tank that doubled as the mower's handle. It was powered by, you guessed it, one of Vincent's little two-strokes. The Rapier was apparently (according to the info I could find, which is pretty scarce) sturdy and reliable, but ultimately not very popular.

Just by looking at the Rapier you can see Vincent's motorcycle fingerprints all over it. In the overhead, it definitely looks like a bike engine, albeit a small one. It breathes through a tiny Amal carb, and it has a twist-grip throttle on the handle. Oh, and speaking of the handle, peep that flip up fuel filler cap. Looks like something straight off a Rapide (although it probably isn't. Probably).

There aren't many of these Vincent-powered lawn mowers around anymore, and they are vanishingly rare on this side of the Atlantic. There's one at the Barber Museum, and there's one currently for sale on eBay, but there can't be more than a handful over here. They're very cool, and lovely in a real mid-century industrial design kind of way. They look like something out of Fallout, like an alt-history mower when people actually gave a damn about design and aesthetics in even the simplest machines or buildings. I don't know that I'd mow my lawn with one, but I'd sure like to have one in my garage. If only to be able to tell people, "Yeah, I have a Vincent".