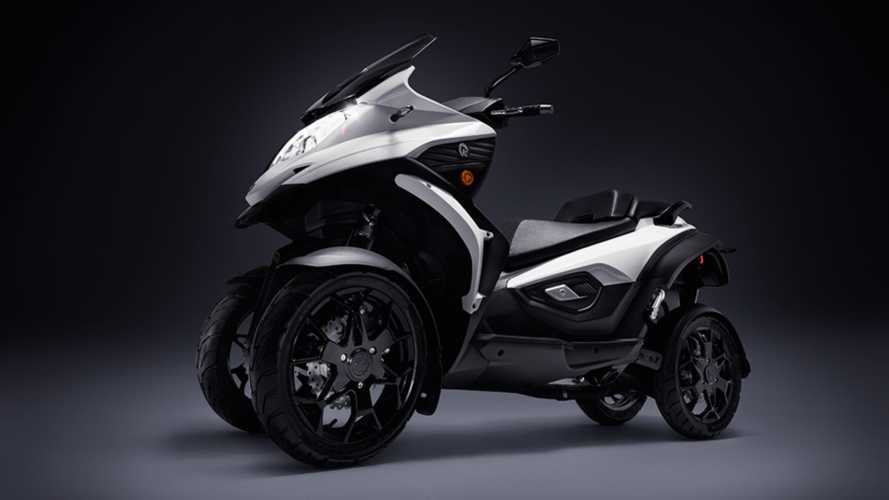 The idea of a four-wheeled scooter still hasn't taken off, despite our early optimism about the idea. Manufacturer Quadro hasn't given up hope and plans to bring yet another innovation to the project: Zero's electric drive system.

The Quadro Qooder looks much like any other scooter except for one important detail: it has twice as many wheels. Not as obvious until you see one in action is that fact that despite four wheels, the Qooder tilts like the Yamaha Niken or a Tilting Motor Works Harley. This further blurs the legal line between cars and motorcycles, which can no longer be determined strictly by how many wheels a vehicle has. In Europe you can ride the Qooder without a motorcycle license, but it's not approved for road use in the U.S. on any driver's license—probably because our legal system wouldn't know what to do with it.

The current Qooder has a 400 cc liquid-cooled engine generating 32 horsepower and 28 pound-feet of torque. In late 2019 Quadro will introduce the e-Qooder, which will utilize an electric powertrain supplied by Zero. No specifications are available yet for the electric version, but I would suspect it to have comparable power, more torque as electric motors do, and a reasonable range. This partnership will enable Quadro to tap into the increasing interest in electric scooters with its existing platform, while Zero will get a foothold in this growing market as well without having to develop a scooter of its own.

Electric scooters are already proving to be not only useful and practical in cities, but they are also encouraging design innovation outside the traditional scooter model, such as Yamaha's Tritown concept. Electrifying the Qooder makes a great deal of sense in this context, and both Quadro and Zero stand to benefit as a result. As more such bikes enter the market, perhaps the Qooder's time has finally come, and Zero will be there to power it into the future.