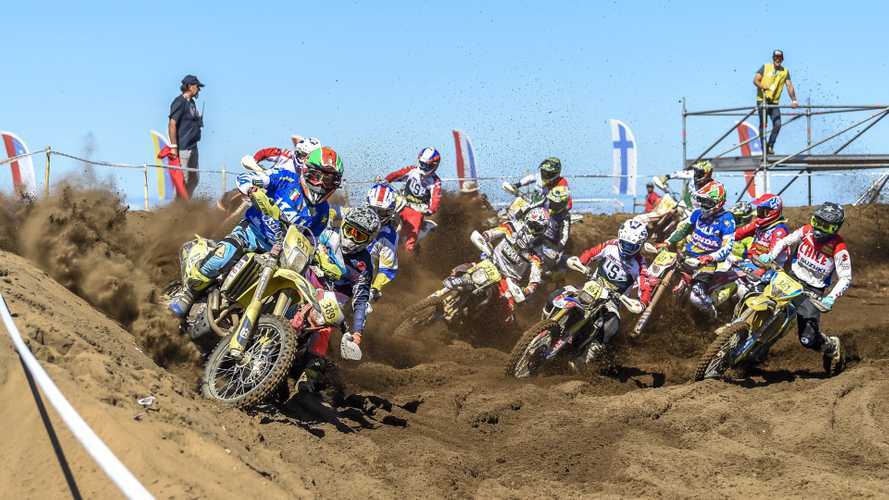 The Aussies pulled ahead of the U.S. on day two and stayed there.

The ninety-third running of the FIM International Six Days Enduro wrapped up earlier this month. As the name suggests, riders competed over six days through a variety of conditions ranging from deep sand by the coast, hard pack in the mountains, forests, and a motocross on the final day.

Rocking Riders: We’re Playing In The Dirt With EveRide
⠀

The first two days of the ISDE took place on the sandy coastline of Chile near Viña del Mar. The United States team set the pace for the first day, beating out rival Australia by just four seconds. The U.S. team was hoping for a second ISDE win and was off to a good start toward making that happen. Spain took the last podium position in third place, one minute behind Australia.

Although day two repeated the same course, it was in significantly worse conditions due to wear and tear from the day before. A great deal of dust hung in the air as well, making visibility a challenge. Despite this, Australia managed to pull a 91-second lead on the U.S. to edge ahead in the event. It wasn't all good news for Australia, though, as rider Lyndon Snodgrass was forced to withdraw. With the team down a man, the performance of every remaining rider on the team would count, so Australia couldn't afford to make any further mistakes. Italy nudged past Spain to move into third place but remained two minutes behind the U.S. team.

Day three left the coast and moved to a new course offering a mixture of hard packed and rocky, mountainous terrain, hot temperatures, and even more dust. Australia took to this surface like a fish to water, increasing its lead over the U.S. to a whopping six minutes. The U.S. similarly stretched its gap push Italy six minutes behind in third place. France, who won last year, moved up to fourth place and was closing the gap on Italy. Not much changed on day four. Australia maintained its six-minute on the U.S. Italy closed its gap to three minutes behind the U.S. while France remained three minutes behind Italy.

The different terrain of the Peñuelas Lake and Wood on day five had no effect on the standings. Australia once again maintained its gap over the U.S. while Italy fell to four minutes behind the U.S. France, by its own admission, suffered on the dusty hard-pack terrain of the forest, which was disappointing after last year's win.

The sixth and final day if the ISDE is typically a motocross event, and this year was no exception. Australia only finished third overall for the day. Italy charged ahead to win the day, with the U.S. maintaining second place. Riding more conservatively ensured that all of Australia's riders finished well enough to take the overall ISDE win. The U.S. settled for second, and despite a valiant final push, Italy finished third.