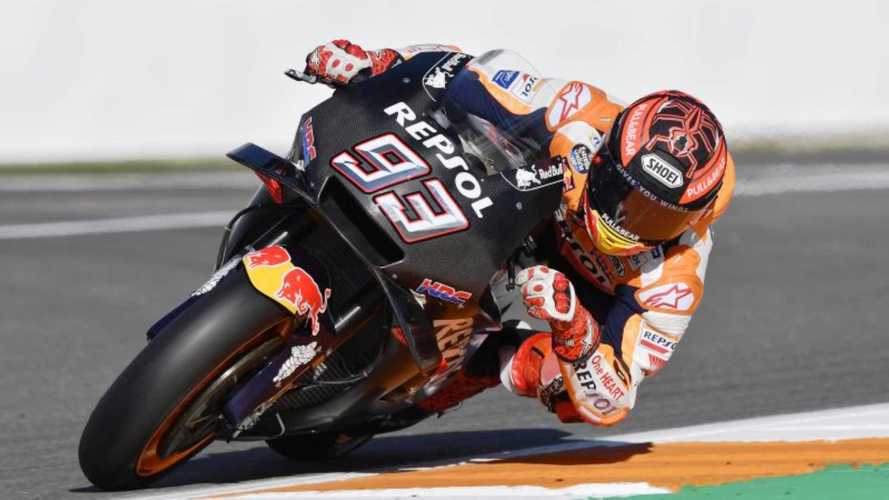 Still injured and yet to have shoulder surgery from his crashes at the Valencia race, champion Marc Marquez set the third fastest time of the test sessions. Maverick Vinales, Andrea Dovizioso, Jack Miller, Danilo Petrucci, and Franco Morbidelli all managed to turn times during their test sessions that were faster than the official lap record at the track. Valentino Rossi, soon to turn 40, showed he may still win a tenth championship next year by ranking ninth fastest of the session.

Honda brought two different flat black prototype versions of the 2019 RC213V race bike for Marquez, and his rival turned teammate Jorge Lorenzo, to test. According to Marquez, these bikes featured different engine tunes and chassis setups as Honda hones in on the balance between torque, durability, and rideability, with several evolutions still to be tried. Lorenzo, new to Honda for 2019, was not allowed to comment on the differences between the RC213 and his former Ducati. When asked about his new teammate, Marquez said that on the track they will still be rivals racing to win, but off the track, they will keep things professional.

Maverick Vinales crashed on the first day of practice but improved and managed to set the fastest time of the session in the last hour of testing with a 1:30.757 on his Yamaha. Andrea Dovizioso on the latest 2019 Ducati eeked out a 1:30.890 in his final few laps on the track, besting Marquez's 1:30.911. Lorenzo, still learning his way around the RC213 and how to set it up, nevertheless had a fast time of 1:31.584; good enough to rank 12th. Valentino Rossi was not too far off the fastest laps of the session, with a quickest time of 1:31.371 on his upgraded for 2019 Yamaha.

The second MotoGP test of the off-season takes place next week in Jerez, Spain, starting on Wednesday the 28th. Check back here next weekend for an update.