The Risks Of Riding In Fire-Plagued California 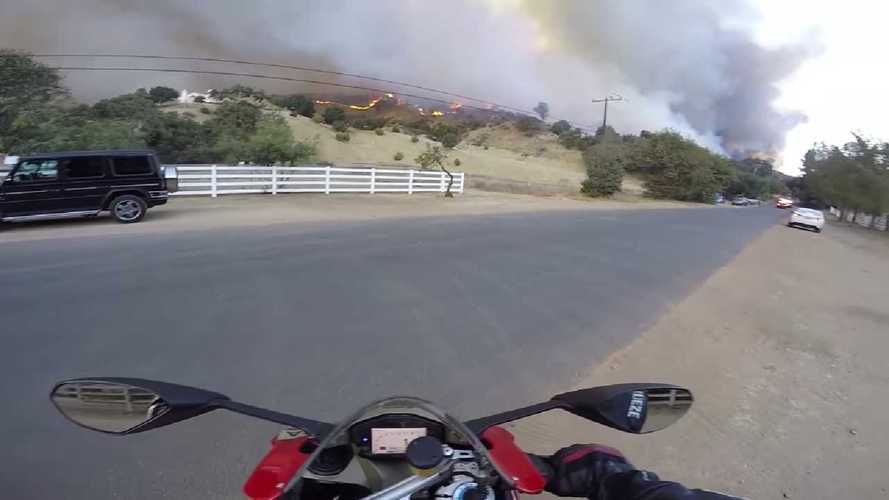 As bad as the fire is, there are even more dangers beyond the fire itself.

California is currently ablaze again. Entire towns have burned to the ground, hundreds of people are missing, and the entire state (and many surrounding states) is blanketed in a miasma of smoke and ash. The danger from the fire itself is obvious, but not so obvious are some dangers that spread far away from the fire itself and can harm unsuspecting motorcyclists.

Staring Down the Bumper of a Firetruck
⠀

Man Sets Fire to His Dream Bike To Make a Point

First of all, if you're in an area affected by the fire, get out, and leave the bike. It may be your pride and joy, but riding out of the fire leaves you exposed to sparks and even a raging fire blocking the road. You want a steel cage that can protect you from brief exposure rather than taking the risk of catching your bike or your clothes on fire. You may lose the bike, but that's what insurance is for. Your life is more important.

Even far from the fire, smoke can be a problem. The fires are about 200 miles away from San Francisco, but dense clouds of smoke have descended upon the city. Visibility is poor, like a thick fog. You can't see very far, and other people can't see you, even on a Harley dresser full of lights. Smoke is also causing a significant health hazard when it comes to breathing. Stores are rapidly running out of face masks, and officials are advising people to limit exposure and stay indoors until the smoke blows over sometime next week. The open air is a major appeal of a motorcycle, but in this case, it's downright dangerous, with air quality dropping to hazardous levels. Most modern cars have cabin air filters, so if you have to go somewhere, take the car and save your lungs.

Another hazard that can fall far beyond the fire is ash. Sure, it's inconvenient when it leaves a layer of dust all over the bike you just detailed yesterday. It also leaves an almost invisible film on the road that significantly reduces traction. A number of Redditors have learned this the hard way. Try to avoid any hard braking or turning, and know that your traction may be more limited than usual.

One more hazard to riders that's not directly related to fire is the traffic surrounding it. The vast numbers of people fleeing the fire may cause more traffic on the road than normal. These drivers are justifiably frightened and may be more worried about their house burning down than watching the road. They're a hazard but cut them some slack. They're going through a lot.

Even drivers not trying to escape the flames may be distracted by the thick smoke billowing in the distance, a nearby hillside on fire, or an airplane dumping fire retardant from the sky. You don't see these every day, and people will want to watch. If you're lucky, they'll pull over to do their rubbernecking, but even then you need to be careful of parked cars in unusual places. They can also pull out without warning, so keep your scanners peeled.

If you're fortunate enough to not be in the line of fire, good for you. But stay aware of these hazards that can still affect you and your riding, even hundreds of miles away. In the immortal words of Hill Street Blues' Sergeant Phil Esterhaus, "Let's be careful out there."