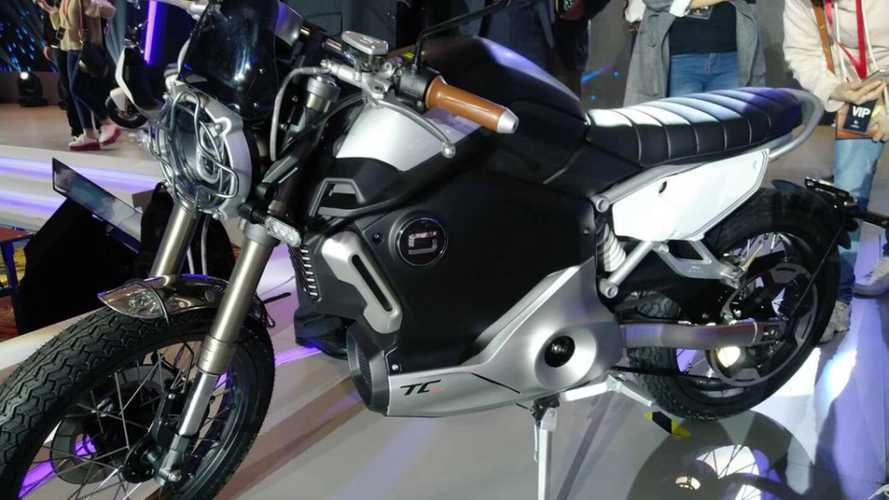 Chinese manufacturer Super Soco got in on the EICMA reveal action by showing off an upgraded version of its TC electric motorcycle, the TC Max.

THE WAVE OF THE FUTURE

Visually, the TC Max is indistinguishable from its lesser TC cousin. The differences are under the skin. Its motor will generate 125 pound-feet of torque which can push the TC Max to a top speed of 62 miles per hour. That's not particularly fast, but good enough anything but the highway. It's also an improvement over the standard TC's 46 mph, which is further limited to 28 mph for the European market.

The TC Max may be small, but it features quality Brembo brakes with the front and rear brakes linked for simultaneous operation. At the heart of the TC Max is a 72 volt, 45 amp-hour lithium-ion battery. It can hold 3.2 kilowatt-hours of juice, which should give the bike a range of 68 miles. This again beats the TC and its 50-mile range. The battery itself is pretty large for a bike of this size, about as large as it can be while allowing the rider to remove it from the bike. Still, being removable means you can bring it inside to charge rather than requiring an outdoor power hookup, which can be difficult to come by at times.

Super Soco will begin building the TC Max early next year with European deliveries to begin a few months later. It will sell for $5,100 with standard aluminum wheels, with classic looking spoke wheels being a $228 option. So far the TC Max will not be available in the U.S. but Super Soco is working to change that and gain federal approval to sell it here. How successful it will be across the vast expanses of America, I'm not sure, but it looks like it could be an excellent choice for urban areas for the same reasons it sells in Europe.