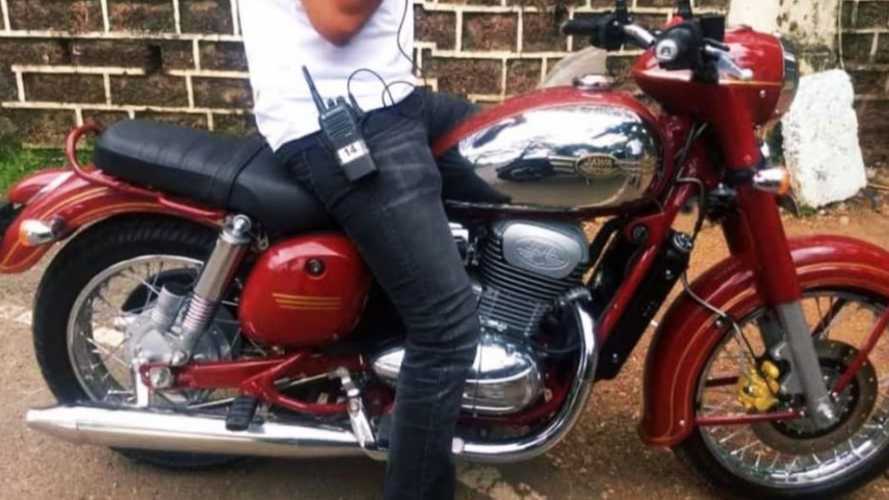 Scrambler and bobber variants may join the standard model as well.

Jawa is an old name with a new life. India-based manufacturer Mahindra wants to go after Royal Enfield by reviving the classic Czech brand that was previously so popular in India. We've seen its 300cc single engine with an unusual dual exhaust that will power its new motorcycles. Now we can take our first look at the motorcycle itself thanks to spy shots that have popped up on Facebook.

THESE ARE NOT THE DROIDS WE'RE LOOKING FOR

Czech it Out - Jawa Goes After Royal Enfield's Crown

Jawa intends to reveal its new motorcycle (or motorcycles—more on that later) to the public at an unveiling on November 15. A contest has been running on Jawa's Twitter feed, a series of questions and answers that will win ten lucky people tickets to the unveiling.

The cover is already off the standard model, however. Brown tape covers many features on this test mule, but we can still see the classic design, with a round headlight, plush seat, and dual shock absorbers. It appears to have a radiator up front, indicating that the engine will be water-cooled. Telescopic forks with covers appear up front, similar to the Royal Enfield models that Jawa intends to compete against. A single disc brake appears in the front with a drum brake in back, but these should still provide adequate braking for the small bike while reducing production costs.

Additionally, a completely undisguised model has been spotted as well. This features more classic styling, including large chrome panels on either side of the gas tank. We still can't see the instrument panel, but the rest of the bike looks great and true to the Jawa brand.

This may not be the only bike Jawa reveals on November 15. Also on its Twitter feed, Jawa posted a video showing its new 300cc engine superimposed on top of sketches of different types of bikes, most notably a scrambler and a bobber. Does Jawa intend to produce an entire lineup of motorcycles based on the same fundamental architecture? It's possible and would position the company to have a leg up on Royal Enfield in producing a wider variety of motorcycles. November 15 should be an exciting day to see exactly what Jawa has in mind.