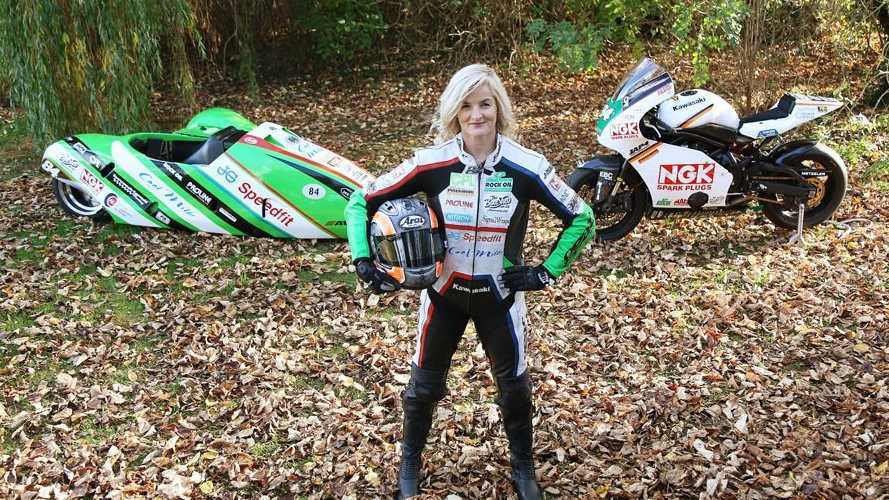 Behind every great Isle of Man is a woman.

Twitter is all a titter!  British motorcycle racer and Maria Costello MBE is about to become the first female president of the TT Riders Association. In a taped interview she exclaimed, “I’m a little bit blown away by getting this position but totally excited, honored, proud to be part of such a fantastic charity.”

91-Year-Old Woman Tears Up the Track on a Gixxer

No kidding! In its 67-year history, the association has never had a woman at the lead, although this championship racer has certainly been at the front of the pack before.

The British racer from Spratton in Northamptonshire held the Guinness World Record for “Fastest Woman To Lap The Isle of Man TT Course”. She got that by clocking an average speed of 114.73 miles per hour. She was also the first woman to take the podium at the Manx Grand Prix at Isle of Man and she races vintage and side car!

In November of 2009, Costello was presented with an MBE—'Member of the Order of the British Empire'—for her ‘services to motorcycling. Costello described receiving the honour as, “a good moment for the sport, and for women in motorcycling,” and added that, “it was special for my family too - they'd been wondering what on earth I had been playing at all these years!” This November she’ll be handed the ‘chain of office’ at the TTRA's annual luncheon in Birmingham.

Off the track, Costello has also done much to encourage women in the sport. She started Woman on a Motorcycle, one of the first Facebook groups that encouraged fellow female riders to swap stories and gear, make plans to ride together, and organize all-female track days. Additionally, Costello was invited to join the Commission for Women in Motorcycling, a branch of FIM—the Federation of International Motorcycling.

So, although in 2018 it shouldn’t be news that a woman is taking over, it certainly is rather fitting that she be chosen to helm this famous organization.