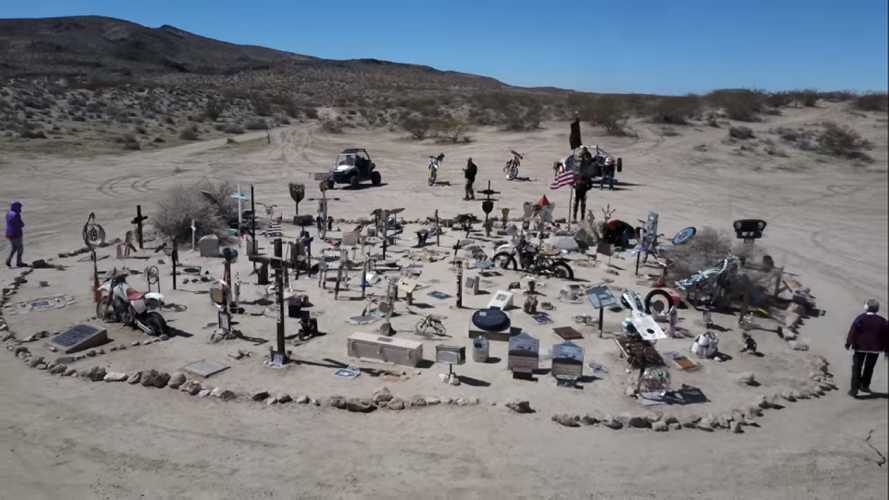 In the middle of nowhere, California, there's a growing memorial centered around a half-buried Husqvarna.

We hate to think about it, but every time we get on a motorcycle there's always the possibility we might not come back. Hearing about a fallen rider is always a sad occasion. There is a unique site out on public land in the middle of nowhere, California, dedicated to remembering those riders who never returned.

Memorials to the Riding Man

It started in 1987 when the Desert Zebras Motorcycle Club wanted to commemorate desert racer Jim Erickson. They brought his 1978 Husqvarna 390 dirt bike out to a remote site in the Mojave Desert and buried it up to its axles in concrete to serve as a memorial to him. Over time other desert riders found the monument and began adding their own contributions to memorialize other riders, typically riding gear or motorcycle parts in the spirit of the original monument. Now around 100 additional memorials have joined the original one, though the site is still known as the Husky Monument in reference to the original bike.

Riders, groups, and clubs often make the journey out in the desert to the monument as a sort of pilgrimage. Often visitors just want to pay their respects to riders who are no longer with us. Once in a while, a group will add a new tribute piece to the monument. Riders may have passed away either on or off the bike, by accident or by old age. Though current additions may have little else in common with the Desert Zebras who planted the original Husky in the ground, they all share a common love of off-road riding.

Since the monument is on public land, there are often rumors or worries that the Bureau of Land Management will someday remove it. Reasons range from cleaning up trash to not wanting to set a precedent allowing permanent structures to be built on public land. But in 2016, the BLM's California Desert District external affairs officer for the BLM's California Desert District, Stephen Razo, told the LA Times that they have no plans to disturb the monument as long as it involves no danger to people or the environment. They seem to recognize the significance of the memorial and do not want to change that.