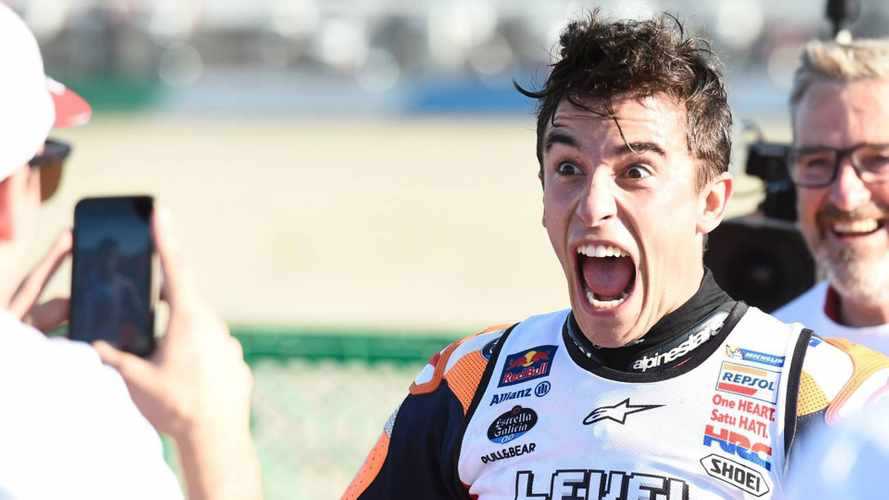 Have you ever been so happy or excited you physically harmed yourself by celebrating? One time I won a samurai sword by winning a mildly athletic contest (don't ask, it's weird) and jumped with joy. I landed wrong, sprained my ankle, and collapsed in a heap in front of about a hundred applauding nerds. It was mortifying. That all just came back to me as I watched Marc Marquez get so happy about winning the Japanese GP that he dislocated his shoulder by celebrating. Well, okay, technically he didn't dislocate his shoulder himself. No, someone else did it for him.

After winning the 2018 Japanese Grand Prix at the Motegi Circuit on October 21, Marquez clinched his fifth MotoGP title. Understandably excited, he stopped during his cooldown lap to kick off the celebration. As he was doing a burnout surrounded by his crew, his former Moto2 rival and good pal Scott Redding rolled up to offer congratulations and a big old hug. Apparently, Redding was so enthusiastic in his congratulations that he popped Marquez's shoulder out of its socket. Not exactly the best way to begin your celebration, eh?

“Scott stopped and I hugged him, and I felt something strange in my shoulder right away," Marquez said. "I just dropped to the asphalt when I stopped and my brother put it back in again though. It’s not that big a deal anymore because I’ve dislocated it many times while training.”

Marc, buddy, you're not supposed to make a habit out of dislocating your shoulder. Afterward, when the press could finally get a word out of him instead of just a delirious "WOO", Marquez had this to say about the 2018 MotoGP season,

"It has been a great season, and ever since Aragon I’ve been tasting, imagining this title because it was very close. Then I realized that this wasn’t my style, and I needed extra motivation, so I set the goal of trying to achieve it with my first match ball—in Motegi, by winning the race."

Ya done good, Marc. Rest up, and we'll see you next season.