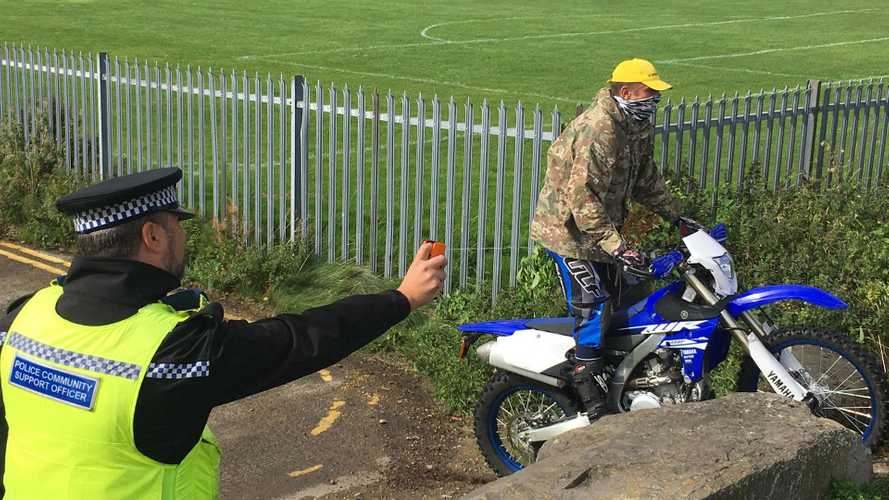 When all else fails...

We've talked a lot here about the wave of motorcycle-related crime plaguing the UK over the years. There was that jewelry heist that got foiled by a passerby stealing the keys off the getaway bike. Then there was the kid who got all liquored up and crashed his bike the evening before his motorcycle license test. Oh, and lest we forget, just last week there was the genius who fled the bobbies on a stolen Kawasaki and led the coppers straight to his grow op. The cops are at their wits end over there so they're looking for any edge they can find to fight the country's motorcycle hoodlums. One police department has recently even adopted a DNA tagging system, which sounds like some sci-fi gibberish but is, in fact, a thing.

30 DAYS IN THE ISOCUBES, PUNK

According to the Northumbrian, UK, Police, officers in Sunderland and South Tyneside are now equipped with a water-based, invisible, UV-reactive tagging spray made by SelectDNA. It comes in a spray canister that looks like a pepper spray canister and, when deployed, can mark equipment, clothing, and skin with a "uniquely-coded but invisible dye that can provide forensic evidence to link individuals or items to a specific crime." Basically it's a near-impossible to get off tag that is invisible until hit with UV light, under which it glows a specific color linked to the police departments. So, spray your subject, find 'em later, hit 'em with the UV, and Bob's your uncle, one caught perp.

“This is something that has been successfully used at other forces across the country and will provide our officers with another effective tactic in combating anti-social, off-road biking,” said Temporary Superintendent of Northumbrian Police Barrie Joisce. "It is unacceptable for the anti-social behavior of a minority to bring misery to a majority who can be made to feel vulnerable in their own homes or intimidated when out spending time with their friends and family. As part of this trial, we will also see whether the spray can be used to help detect other types of crime and bring those guilty of flouting our laws before the courts."

These DNA sprays are all over Europe, I even saw some automated ones on the street in the Netherlands that were monitored and would spray loiterers and suspicious characters. How long until we get this stuff here? Who knows, but I reckon whenever it comes it'll be too soon.