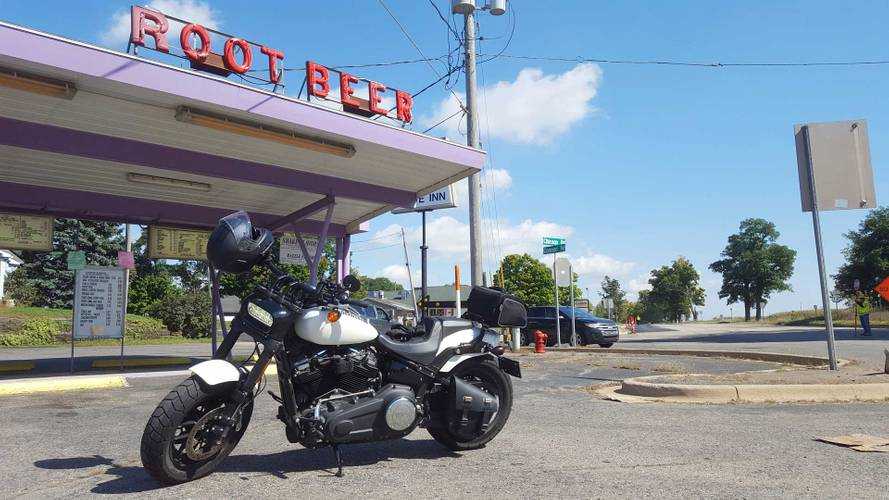 Well, it finally happened. After much hemming and hawing and dragging of feet, I finally returned FleetBob to the place of its birth—Harley HQ in Milwaukee. After spending a whole summer riding and bonding with the big Harley it was kind of hard to return it. I was sorry to see it go, which is a hell of a thing for me to say since I'm not particularly a Harley guy, and I knew that the FleetBob-shaped hole in my garage would be hard to fill. So, to have a last bit of fun with it and send the bike off in style, I decided to take the long, scenic route to Milwaukee.

Instead of a straight blast along I-94—which is both boring and miserable on a short-range bike with no windscreen—I opted to flog FleetBob along U.S. Route 12 from Detroit to Chicago. I'd stay the night in Chicago, then the next morning take a mix of back roads and rural highways from Chicago to Juneau Avenue to drop the bike off. With that done, I'd hurry to Milwaukee's train station and catch an Amtrak home to Detroit (with a stopover in Chicago to switch trains). Believing that this was the best idea ever in the history of ideas, I loaded up my bags, kissed my daughters goodbye, and headed out on a short version of the Great American Road Trip.

For those of you who don't know, U.S. 12 is one of the OG numbered United States highways. It runs from Aberdeen, Washington, all the way to downtown Detroit, Michigan. Here in the Wolverine State, it runs east/west for 210 miles between Detroit and a little place on the Michigan-Indiana border called New Buffalo. It's one of our State Trunkline Highways and for much of its length, it's a two-lane blacktop scenic route that runs through pretty countryside and small towns. It runs through the lovely Irish Hills—an area full of lakes, hills, trees, twisty roads, state parks, and tourist traps—and has some surprisingly technical stretches of road. It also has a lot of boring flat straights, especially in the southwest part of the state, but you have to take the good with the bad.

The first leg of the trip, from Detroit to Chicago, was two-thirds fantastic and one-third excruciating slog. After a short blast on the freeway to Ypsilanti for a massive breakfast at the Bomber, I picked up U.S. 12—called Michigan Avenue along this stretch—and headed west. I passed through small towns like Saline and Clinton, then down a long, sloping, tight right-hander into the Irish Hills. The stretch of U.S. 12 through the Irish Hills is the kind of road the Fat Bob was built for. Lots of hills and sweeping curves to challenge the new Softail suspension and fat tires and some nice straights where the bike can stretch its legs. The big 114 Milwaukee Eight did its best work here in third and fourth gear, always ready for some hill-killing torque or a burst of hard acceleration on a short straight. The bike was eager, willing, and poised. I was as happy with it as I'd been the entire summer as I put it through its paces here.

It wasn't all decreasing-radius curves and long straights, though. U.S. 12 through the Irish Hills is lined with old-school, mid-century-style roadside attractions. Some, like the long-closed and lamented Prehistoric Forest, have been shuttered for ages and are now slowly deteriorating. Others are active tourist traps like the Stagecoach Stop and Mystery Hill. There are also numerous lake bars with clever Irish names and little greasy spoons and drive-ins that give the whole place a real stuck in time feel. It's one of my favorite places.

Coming out of the Irish Hills high on adrenaline, FleetBob and I settled into the rest of the trip across the state. The closer to the Indiana line you get the less interesting the ride is. The roads get straighter, the land gets less picturesque, and the ride turns into a real chore. As I got into this part of the trip the weather turned on me. Heavy cloud cover rolled in and around the time I got to Indiana Dunes State Park the rain started in earnest.

This was the most miserable part of the ride. I'd been in the saddle nine hours at that point—I'd done a lot of dawdling, picture taking, coffee drinking, and sight-seeing along the way—and I was cold, hungry, achy, and ready to get off the bike. I did discover a killer Latinx neighborhood in Hammond, Indiana, with some amazing-looking restauraunts (including one joint called La Authentica Birria Estilo Ocotlan that I will definitely be returning to try). Eventually, after 12-ish hours on the road, got to my cousin's place in the western Chicago suburbs, filled up with whiskey and Chinese food, and hit the sack.

The next morning was bright, clear, and cold. Undaunted, and with a plan to get to MKE in time to take in the Harley Museum before dropping the bike off, I set out with high hopes and a full tank of gas. That optimism lasted roughly an hour before I gave up on the museum, pulled into a breakfast joint in Lake Geneva, and warmed up with some coffee and corned beef hash. It was cold out there, and it was a damp cold that was cutting through my leather and layers like a knife. I was ready to get this done with though, so after second breakfast I was right back on the road again.

Talk about some pretty country. The fringe between Illinois and Wisconsin is gorgeous and, when not cutting through suburban hellscapes, features some really nice riding roads. Eventually, I made it to Milwaukee, dropped the bike off at Juneau Avenue, said my goodbyes, and hopped my train back home to Detroit.

So, final thoughts on FleetBob. This is what you're here for, right? I spent three months trying to force FleetBob (a short-range factory bobber) into a role it wasn't suited for (a medium/long-range road trip machine) and never quite got it there. Does that matter in the long run? Nah. The new Fat Bob is perfect for the role it's been assigned. It's great around town, surprisingly agile, fun, powerful, and fast. Really fast with the 114 engine. It never let me down, did exactly what I asked it to, and despite a few tiny annoyances (rattling fuel cap, rubber inserts falling out of the rider footpegs, and a speedo that fogs up in the rain or high humidity) I liked it a lot. Good job, Harley. Keep up the good work.