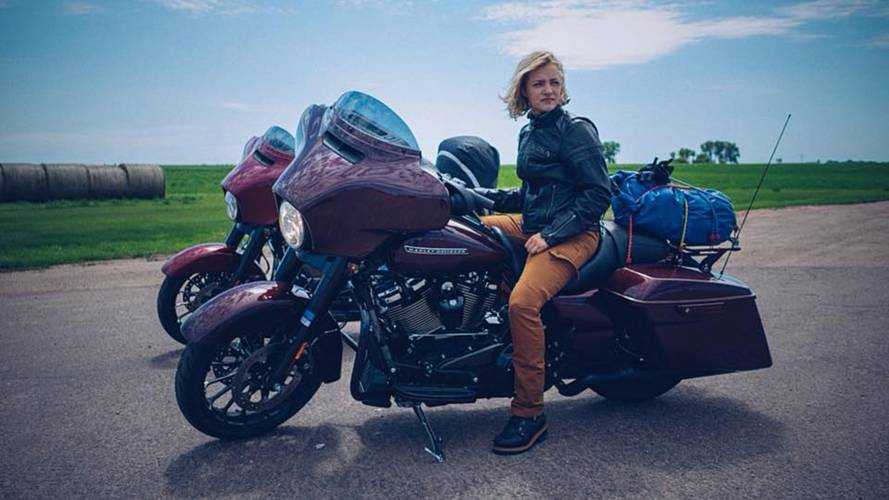 The Harley-Davidson Find Your Freedom Internship is coming to an end. One of the interns clocked 8k miles on her Street Glide and celebrated at Sturgis.

At the beginning of the summer, over 7,500 people from around the world tried their luck at becoming a Harley-Davidson intern. Besides the coffee-fetching and social media publishing, the interns were expected to spend long hours learning how to ride at the H-D Riding Academy, attending music festivals and motorcycle rallies, attending Harley-Davidson's 115th Anniversary celebrations, and riding their own Harley bikes. Sounds awful, right? In June, eight interns were selected from around the world. Now, the summer is slowly crawling to an end and so is the internship. One of the interns didn't shy away from taking full advantage of her luck and put her shiny new bike to good use.

THE CONTEST THAT STARTED IT ALL: Harley's #FindYourFreedom Interns Announced

Tessa Otto from Kennan, Wisconsin, has had a summer to remember. Straddling her red Street Glide named Fiona, she has been busy covering such events as The Wild One flat-track motorcycle race in Castle Rock, Washington, or the Born Free bike show in California on social media. Sometimes, she would have to travel 500 miles a day for days on end. She even told Brinkwire that she hasn't driven her car since the beginning of the internship, in June.

CHANGE TAKES GUIDANCE: Harley Looking for a Guide to Come and Take it By the Hand

One of her mission as an H-D intern has been to attend the Sturgis Motorcycle Rally and she made it count. She traveled from Wisconsin with her dad who rides on a 1995 Electra Glide. He's responsible for transmitting his passion for riding to his daughter. Over the summer, Tessa has clocked over 8,000 miles on her Street Glide and she'll get to add plenty more since she'll keep the keys to the bike at the end of the internship. H-D has been part of her life since she was a kid and she intends on carrying on the tradition. After she graduates from the University of Wisconsin-Oshkosh in project management, Tessa would like to get a job at Harley.

THE SAGA ENDURES: Trump Wants Us to Boycott Harley-Davidson

Harley's internship program was built as part of their ongoing strategy to attract younger riders. The company also recently released a sneak peek at some future additions to their lineup that are branching away from the typical cruisers. The plan also includes training new riders, grow international sales, and add more bikes to the lineup.