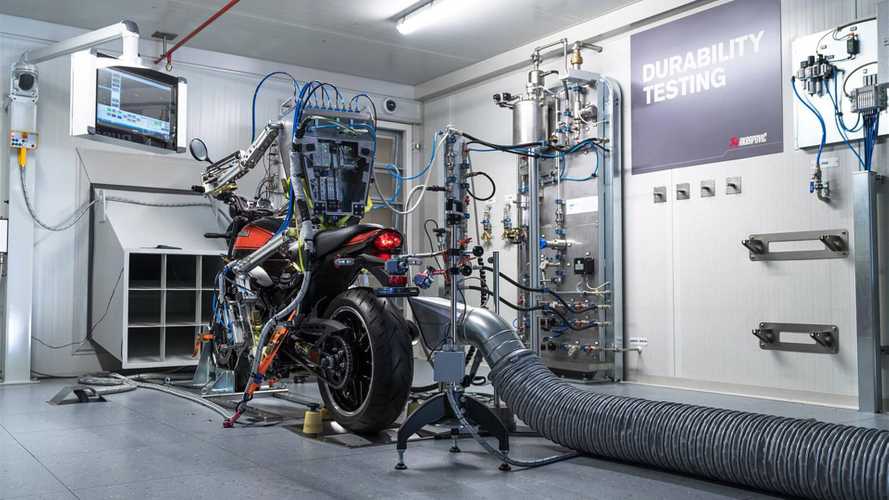 Exhaust-company Akrapovic has a new member on its team: the Durability Dyno is a riding robot that will pile up the miles to test all the exhausts.

Guys, Check it out! it's a robot and it's riding just like us

Robots do everything nowadays. They walk, they talk, they encourage us to order crap we don't need off of Amazon. Even BMW has created its own Transformers to put autonomous driving technologies to the test. Seriously: name one thing a robot cannot do. "Have feelings" doesn't count, I know humans like that. Slovenian company Akrapovic, specialized in exhaust systems, has come up with its own robot with the mission to test all the exhausts and it's awesome.

BMW TRANSFORMERS: The Autonomous Motorbike is a Thing and It Could Save Lives

Meet Durability Dyno, the latest addition to the Akrapovic team. Dyno's new job is pretty much to ride and keep on riding. The pay isn't great, but the gig sure is! Dyno is in charge of testing the durability and efficiency of the company's exhausts in a state-of-the-art tech lab. Until now, the team was limited to testing their technologies on the track like everyone else, limited by weather and the human element. Dyno won't get tired and its new controlled environment will allow it to run its tests whether it's sunny or raining frogs outside.

TO INFINITY AND BEYOND: Suzuki Goes to Space! - Bike Giant to Fund Lunar Exploration

The Durability Dyno system includes a motorcycle-riding robot that will run the Akrapovic exhausts through thousands of miles of testing in a perfectly controlled environment, complete with gear changes and accelerations for a more accurate portrait of the exhaust system's performance.

It is also hooked to sensors and cameras for monitoring purposes as well as to an automatic refueling system to allow Dyno to keep running his tests without interruptions.

I'D CALL MINE ALFRED: Piaggio Introduces Smart Assistant to Carry Your Bags

The video released by Akrapovic shows us how Dyno works. The robot pulls the clutch, changes gears with a specially fitted "foot", revs the engine up, and even taps the brake lever—it's a fascinating process to witness. Oh and that Kawasaki z900 RS sounds fantastic.