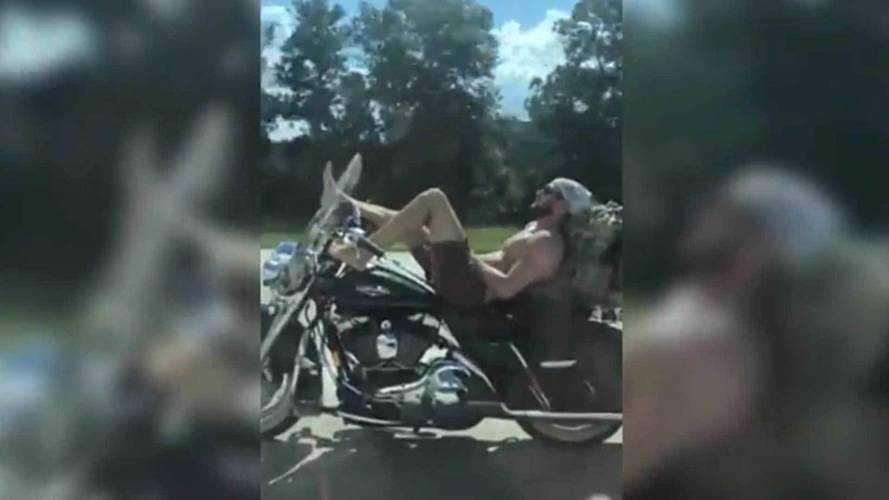 Sometimes there's a man, and I'm talking about Florida Man here, he's the man for his time and place. That's Florida Man, in Jacksonville, on I-95.

This isn't quite what they mean by "relaxed riding position", guy

Oh, Florida Man. Despite our teasing, Florida Man is just like us. After a hard day of Florida-related shenanigans there's apparently nothing Florida Man likes more than to saddle up and take his bike out for a nice relaxing ride. There's relaxing, and there's too relaxing though, and one Florida Man recently caught on video is definitely an example of the latter.

OH: Intentional Hit-and-Run in Florida is Comedy of Errors

According to the Miami Herald, an unnamed mother and son duo were cruising down I-95 near Jacksonville on August 18, 2018, when the Florida-est Florida Man to ever Florida hove into view in the right lane. There he was, sprawled on his Harley-Davidson Road King using his luggage as a back rest. Fully at peace with the world, and the regular 70 mile-per-hour flow of traffic on I-95, he was shirtless, helmetless, wearing short-pants with his bare feet propped up on the handlebars. Majestic.

FLORIDA: Florida Man Shot With Own Gun After Motorcycle Crash

Overawed by this avatar of Florida-ness, they did what any of us would have done—whipped out a cell phone and recorded the sight for posterity (you can tell how flummoxed they are since they recorded the video vertically, which should be a hanging offense). The video is short and sweet, but it captures the essence of this Florida Man perfectly. He glides by the car serenely, untroubled by the world around him, taking it easy for all us sinners.

Now, typically, we here at RideApart are an All The Gear All The Time kind of crew. We hold dear to the old adage that you don't dress for the ride, you dress for the slide. That said, we appreciate Florida Man's complete disregard for basic safety and motorcycle control techniques. Laying there on his bike, he looks ready to tackle anything short of a mild corner or a traffic jam. You know what? We salute you Florida Man. Keep on truckin'.