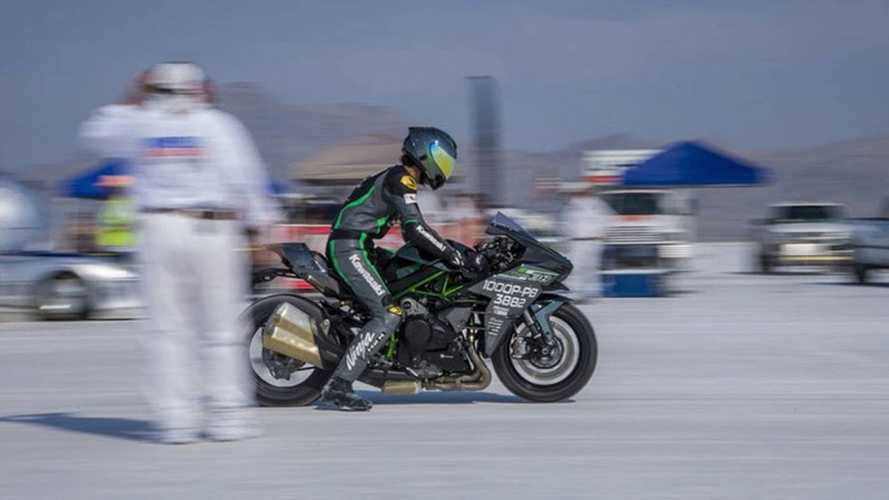 209 miles per hour on salt astride a Kawasaki H2? Indie Japanese race crew Team 38 did it at this year's Bonneville Speed Week, and did it with style.

Earlier this summer, Team 38 announced it would try and set "some" new world record. At the time, it didn't say what record that was. With yet another Bonneville Speed Week in the rearview mirror, Team 38 has every reason to celebrate: it pulled its world record off on its production Kawasaki H2.

#BEYONDSPEED: Kawasaki Going After Another Record With H2

The team recorded a 211 mph speed and a return speed of 207 mph for a combined average of 209 mph. That's the number that allowed Team 38 and it production H2 to win the title and set a world record in the P-PB 1000 class. This class is reserved to production supercharged motorcycles of less than 1,000cc with very strict limitations to the type of modification that can be done: the model's original power figures are the main attraction. This was no small feat considering the surface the team was working with and the limited tuning it was allowed to do. The work of the engineers, combined with that of the rider paid off.

A month ago, the team announced it was going to attempt to break a world record, its second attempt in two years. It remained very secretive about the type of record it was going after. Using the cryptic tag #beyondspeed for this year's run, it led us to believe there was something really special in the works. A class world record isn't what we had in mind, but is still pretty exciting. This is yet another achievement for both the team and the bike that have over a dozen AMA records under their belt.

Team 38 is independent of Kawasaki, but benefits from the contribution of some of the company's engineers. Add to that a handful of motorcycle enthusiasts and talented riders and you get a pretty solid record-setting team. We still don't know what's "beyond speed"—more speed?