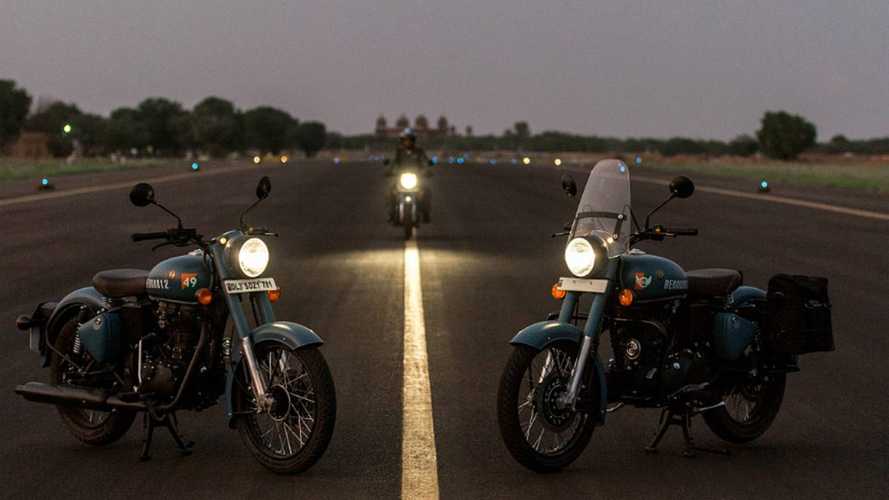 What do you get when you dress up a Royal Enfield Classic 350 in a uniform? You get the milspec Classic Signals 350, a special edition with new ABS.

The Classic 350 is getting the milspec treatment

Royal Enfield and the military have a fling that's been lasting for over half a century. Throughout its history, the maker has been celebrating its military heritage with army inspired models and special editions. This time, the brand is paying homage to its close association and partnership with the Indian Armed Forces. For the occasion, it has released yet another military-looking model, the special edition Classic Signals 350 ABS.

You get to pick between the Storm Rider...

The Classic Signals 350 ABS is a variation of the existing Classic 350 but all dressed up in a uniform. It sports matte color schemes available in either Storm Rider Sand or Airborne Blue. The other exposed components have received the blacked out treatment, nicely contrasting the retro color palette.

The Signals uses the same 346cc air-cooled single cylinder block found in the standard Classic, mated with a five-speed gearbox. Each bike will receive a serial number painted directly on the tank. Accessories such as a windshield and soft tarp saddlebags will also be available. In case you don't want to stick to only playing the part, you also want to look it, Royal Enfield also offers a collection of Signals-inspired apparel that includes jackets, helmets, and boots.

SOMETHING SOMETHING ARMY: You're In the Army Now - Motorcycles at War

What makes the Classic Signals 350 so exciting, however, is a little something we are accustomed to in the US and now have come to take for granted. Aside from its perfectly old-school look, the Signals also becomes the first motorcycle sold in India with standard ABS. The model will pave the way for other models to receive the ABS as well and the company has already announced the 500 lineup, as well as the Himalayan, are on the list.

IS THAT FAST OR WHAT?: Gone in 178 Seconds: Royal Enfield Pegasus Sells Fast

Unlike the special and extremely limited edition Pegasus that sold within three minutes in India, the number of Classic Signals isn't limited. The model is now available for orders across the Royal Enfield's Indian network of dealers only; buyers won't be able to reserve theirs online.