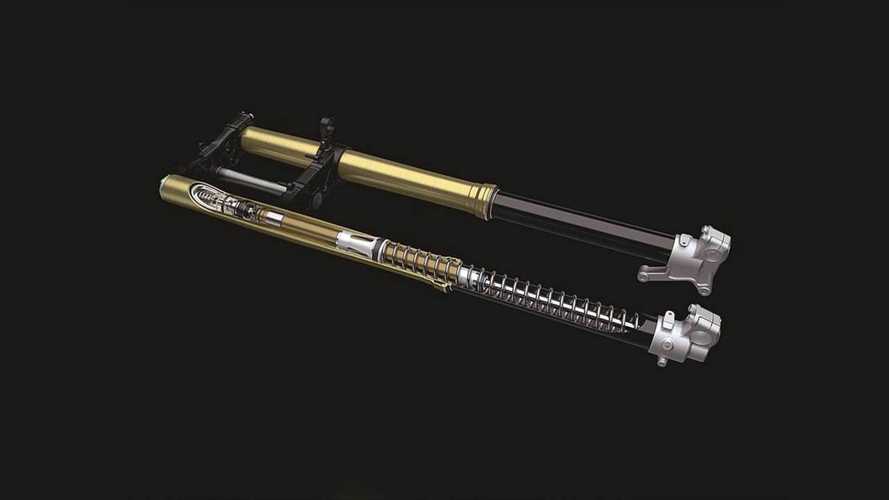 What's a girder front end? Why do bikes have telescopic forks? Why are springers a thing? Todd answers all these questions and more in his new column.

As motorcycles evolved from bicycles, suspension technology evolved to keep riders safe and sound in their saddles

Editor's Note: Hey, friends! Welcome to Business in the Front, a new RideApart series examining the evolution of motorcycle front suspensions. Our man Todd, who knows a thing or two about that subject, will be looking at various suspension technologies—hydraulic forks, Earles forks, girders, etc.—over the next few months examining the ins and outs, pros and cons, of each setup. This first article is an intro, a little primer in where motorcycle suspensions came from and why they are the way they are. So, without further ado, let's dive in and look at how we got from bicycle forks to springers - JM

What about the bump? In 1976, yours truly was in seventh grade and The Bump was the most popular dance around. It was pretty simple as 70s-era dances went. You and your partner just stood beside one another and bumped hips while Parliament-Funkadelic laid down the beat. Videos exist, I recommend that you do not watch them.  For motorcyclists though, the bump is something  completely different. Instead of a pretty tame old-person dance, it’s an obstruction in the road that jars your entire bike and body when you slam over it. How engineers control and minimize the effect of that bump is one of the biggest challenges in motorcycle design.

Beyond the obvious comfort value, a suspension’s most important job is to keep the tire in contact with the road. Imagine vehicle with no suspension at all, like a skateboard. When that vehicle hits a bump only one of two things can happen—it either stops dead or keeps going. If there is not enough forward inertia to push over the bump, the vehicle stops instantly and the rider or driver gets thrown off. If there is enough forward energy for the vehicle to pass over the bump, it will be deflected into the air. It continues in the air until gravity pulls it back down. Cool, right? The problem is, with your tires off the ground you cannot stop, steer, or speed up very well. Also, landing is a bit hard on the spine and kidneys.

A vehicle with suspension can absorb the bump and keep going while maintaining control. The springs compress as the tire hits, storing up the energy so the tire can follow the shape of the bump. When the tire rides over the top of the bump, the springs magically push it down again, no need to wait for gravity. The rider feels the bump but the energy is mostly absorbed by the springs and does not jar your fillings out. The tire stays in contact with the road so you can steer, stop, or speed up. Neat right?

This 1901 Indian Camelback Single is a bicycle in all but name. Note the standard, non-sprung bicycle forks.

Now that we have that little primer out of the way, let's talk about motorcycle suspensions. The earliest motorcycles were little more than bicycles with little engines clipped to the frames, and early motorcycle engineering was more like bicycle engineering. Motorcycles even still had pedals for the first decade or so of their existence. The first commercially available, internal combustion bikes—Indian's Camelback Single, the first generation Harley-Davidson singles, the 1904 Triumph, etc.—still had standard bicycle fork front ends. See, common bicycles use the springy nature of steel for suspension rather than actual springs or fancy suspension setups. That's why bicycle wheels are typically spoked and why the forks are often curved—to absorb shocks and help keep the wheels on the ground over bumps. That natural springy quality was good enough for motorcycles when they measured displacement in single numbers and weren't much faster than a bicycle, but as motorcycles got bigger, heavier, and faster, engineers needed something new to keep bikes safe and comfortable.

HISTORY: Ask RideApart: What Was the First Motorcycle Ever Built

The introduction of real front-end suspension to soak up bumps marked motorcycling’s first major departure from the bicycle since the first Industrial Revolution mad scientists engineers stuffed some steam engines into some bike frames and called it a day. See, once motorcycles were hitting speeds of 35 mph and weighing in at a whopping 80 pounds, better suspension became mandatory for both comfort and rider safety. The simple curved bicycle fork with which late 19th and early 20th century motorcycles were equipped just couldn't hack it anymore. It lacked strength and transmitted painful jolts to the hapless rider. In addition, metal fatigue was still poorly understood and broken forks (not to mention broken riders) became increasingly common as bikes got bigger and faster.

Aptly named 1901 Achilles. Double reinforced forks did not break, but frames, wheels, and riders did.

The first improvement engineers came up with was to braze on a triangulated set of tubes to strengthen the bicycle fork. It worked, after a fashion, but the rider no had no spring whatsoever which was, shall we say, uncomfortable  Worse, all the energy generated from the bike hitting a bump had nowhere to go, so collapsed wheels and broken frames appeared next, along with a few fatalities. It quickly became apparent that simply reinforcing the bicycle forks wasn't working, so new solutions were looked for.

Engineers at Iver-Johnson studied this problem and came up with the idea letting the wheel move within the fork, controlled by a hefty leaf spring. Suspending the front wheel opened the door to higher speeds and a measure of rider comfort.This innovation solved the breakage problem and motorcycles got safer and a little more comfortable. Indian and other American manufacturers used variations of this idea until 1945. Thing is, leaf springs are horse and buggy technology and have limited travel, problems with dirt and rust lodging between the leaves, and tend to make very long motorcycles. Improvement was desperately needed, so motorcycle engineers went back to the drawing board. The next big idea was to move the pivot points from the axle to the steering head. The double reinforced fork was kept, but now the entire front end moves on linking arms controlled by light and progressive coil springs.

By 1924, Norton and many others had “girder forks,” a name that implied great strength to potential customers. One knock-on effect of these newfangled girder front ends was that for the first time in motorcycling history, a sturdy wheel mounted in the fork allowed for genuine front brakes. Brakes that could actually stop the bike and take advantage of the forward weight transfer when stopping. It was at this point that motorcycle engineers took a long overdue and final turn away from bicycle design.

Check out the 1924 Norton photo, notice how the entire front end moves on two sets of pivot arms? One pair is near the handle bar, and the other just above the wheel. The “Plus Sign” devices are leather pads sandwiched between metal discs to provide damping. The wheel does not just snap back down, but has controlled damping. Tighten the discs and get more damping. Tightening the bolts on the springs stiffens up the spring rate.  A fully adjustable fork in 1924! Notice too the front brake, undersized in our eyes, but pretty huge in the twenties. The girder fork dominated the industry until 1949 when telescopic forks took over.

Girders, however, were not without issues and inventors in the 20s and 30s continued to tinker with other suspension setups with various levels of success.  By 1930, race bikes were routinely cracking 100 mph, and tank slappers were the new very scary thing. This new and deadly problem required new ways of thinking about motorcycle suspensions. What could replace the girder, though?

Tune in next time when we discuss the demise of the girder and the meteoric rise of the telescopic fork.