Terrot Reading - The Best Bike I Ever Worked On 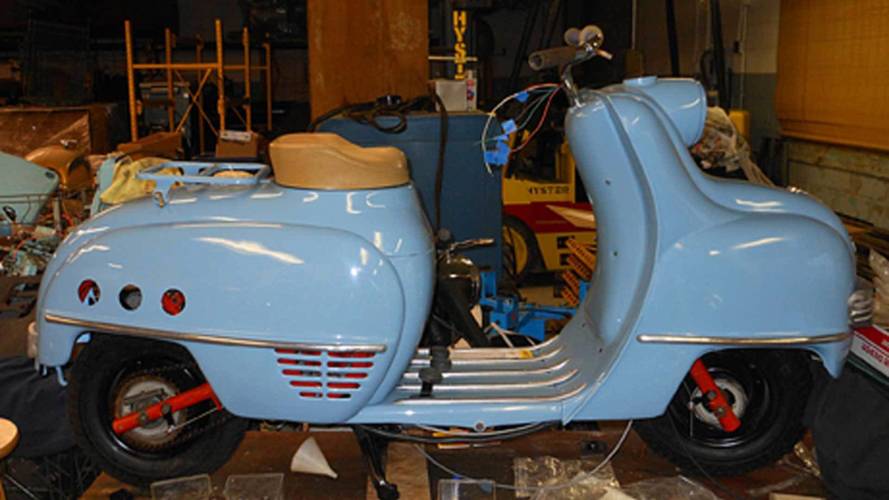 When a customer presents you with some boxes full of parts from a mystery scooter you've never heard of and asks you to put it together, you say yes.

Wrenching on an obscure scooter has hidden benefits

Since the story about the Centauro was apparently a hit, Jason asked me a follow-up question: what was my favorite wrench job? Short answer? A weird, basket case French scooter. Long answer? Read on.

HERE'S THE WORST ONE: An Italian Nightmare - The Worst Bike I Ever Worked On

This project, like the Centauro I mentioned in the previous article, arrived in milk crates. I shudder to say this lest people think that all I do is assemble basket cases. Remember, a basket case is the worst way to buy a motorcycle (Says you -JM). Paying someone to build up a basket case for you is a quick and easy way to end up in bankruptcy court.

The milk crates were owned by a regular named Diane who brought me various scooters and cycles for routine maintenance. One day she popped the question, “Have you ever heard of a Terrot scooter?” My mind went blank, “Uh, no.” I’ve practically memorized Erwin Tragatch's iconic Illustrated Encyclopedia of Motorcycles, and the Terrot scooter did not ring a bell.

A painfully 50s ad for the Terrot.

Terrot, I came to find out, was a well-known French motorcycle manufacturer dating back nearly to the dawn of internal combustion. Terrot’s heyday was probably in the 1930s, when they fielded a line of respectable bikes up to 500cc with overhead cam motors, decent suspensions, and racing pedigrees. In the 50s things were a bit different. Simple, get-to-work machines were required in the post-war era. Piaggio’s Vespa showed the way, and Terrot responded with a 125cc scooter fitted with a two-speed, foot-shifted gearbox, a hand clutch, and impressive styling. Well, impressive to some apparently. To me the Terrot looks like a refrigerator that had collided with a manatee.

HOW I DID IT: My Name is Todd, and I'm a Tool Junkie

Diane explained that her scooter—a 1951-ish Terrot VMS—was all "done up" and just needed to be put together. Problem was, she didn't know where to start. Diane’s father ran a successful and prosperous machine shop, a shop in which she grew up getting hands-on experience with all sorts of complex machinery. To not know how to start was a huge admission for her, so I agreed to help.

The Terrot's bodywork as it arrived at the shop.

When the day arrived I helped unload a van full of large, spotless, matching white boxes. Each box contained an assortment of painted parts—powder blue and orange—which were bagged, tagged, and organized. There were no written instructions or diagrams of any kind. Because everything had been painted, everything was apart, every bolt.

The Terrot is, essentially, a tube bent in an “L” shape. Attached is a front end with a single sided swingarm sprung by a broad, thick rubber belt. The rear section holds the 125cc motor and gearbox unit—bolted up solid, unlike Vespa—and a single sided rear swingarm, sprung by a large rubber donut. The castings and welds were excellent, the frame tubing very heavy. Clearly, Terrot spent some money to produce their moto manatee. How to fit all this together without scratching anything seemed the biggest challenge. Without any manuals, I was in the same boat as Diane—not sure where to start.

Without the bodywork, you can see the Terrot's frame, engine, fuel tank, and that anemic rubber-sprung front suspension. The rubber belt is the black thing on the far side of the wheel near the fender.

Fate played its hand here. Panther, yes that Panther, had once sold this very scooter rebadged as the Panther Princess. I have a book with photos of the Princess, Including photos with the bodywork removed. That was all we needed.

The days and weeks rolled by as assembly commenced. The hardest part was getting all the cables down the steering neck. Five beefy cables—throttle, clutch, front brake, choke, speedometer—and the electrical system all had to pass through an opening the size of a garden hose and 24 inches deep. Eventually I got it. The body is, in fact, one giant piece of sheet metal. From the tip of the front fender to the rear bumper was one piece. How this is possible I cannot answer. Only the side covers are separate pieces. Diane wrote another large check and then assisted as the enormous and flexy piece of metal got lowered over the chassis. Every bolt hole lined up! No kidding. I’m incredibly proud of this bike as I put it together and made it work without any sort of technical details, just some photographs. Diane’s amazing physical restoration of the parts and detailed labeling of every single bit made the bike a success story.

Road testing up and down Woodard Avenue here in the Detroit Metro Area began, and the 1950-era technology exposed some weaknesses. The 125cc power unit is rated at 7.5 horsepower and the gearbox has two speeds. First gear is stump puller, the gearing is so low that redline arrives at slightly more than a jogging pace. This Terrot could probably pull a small car out of a snowbank. Second gear is good for 45 mph, and is also the absolute top end. If you need something in between those two speeds you are out of luck. Top speed is, by the way, absolutely terrifying. The 8 inch wheels bounce freely on that rubber sprung suspension, the brakes are feeble, and the exhaust is motocrosser loud. Add to all this the buzzing, harmonizing bodywork and the Terrot and I caused quite a scene as we blasted up Woodward one quiet Saturday morning.

It took a while, but it was worth the effort.

The Terrot is the oddest vehicle I have ever driven or worked on. Over time the frumpy look grew on me, but the outright crudeness of the engineering took me by surprise. I will say it is the most adventurous, and therefore favorite, wrenching experience I’ve ever had.