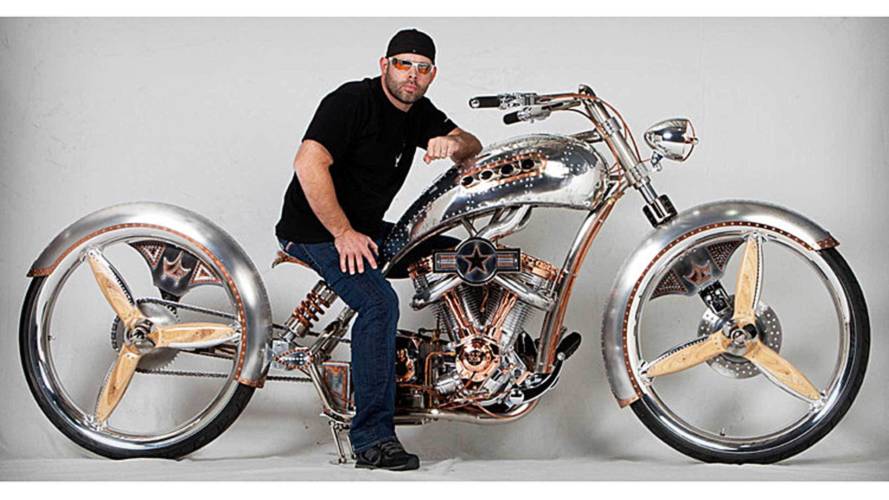 Sophia defends Paul Jr. and compares him to Picasso while Jason looks on aghast in this list of her five favorite Paul Jr. builds.

I’m not sure how I got this lucky, but here it is: Jason Marker, Paul Teutul Jr. hater extraordinaire, asked me to pick out what I thought were the 5 “best” from a wild assortment of bikes you might think only their builder could love.

Full disclosure: until I started to research this story, I knew nothing about American Chopper, the Teutul family, or Orange County Choppers (which is in Newburgh, New York, but why split hairs?). I have gone to many motorcycle shows that feature wildly creative custom chopper builds, so I’m familiar with the style, but not it’s genesis.

My first impression? Amazing. I mean, what I notice immediately is that what purists might hate about these bikes is likely the exact reason why I find them infinitely fascinating—they don’t make ‘sense.’ However, moto-mates, that is precisely where innovation comes from—risks. I mean, Picasso’s cubism flew in the face of the artistic conventions of the time but it also freed artists to stop thinking of the canvas as only representing 2 dimensions, just like the Teutuls added the whole new category of ‘theme bikes’ to the custom build roster.

Picasso didn't paint this, but he could have! (courtesy Anthony Falbo)

TEUTUL ACTION: Paul Jr. Summons a Genie That We've All Seen Before

It’s always the way, in art, science, technology—it takes the brazen to blaze. This appears to be the contribution that the Teutuls made to the custom chopper world—permission to follow any inspiration.

I mean, I watched a few episodes past and present, and these dudes were fighting each other to build what they thought was best ‘cause you can’t move forward unless you break down the walls—literally and figuratively. Besides, there are plenty of people who don’t consider ride-ability to be the most important feature of a motorcycle. So let’s stop worrying about practicality.

FOR YOU: Where Are They Now? OCC’s Vinnie DiMartino

For example, just this past weekend I met a fellow biker fellow with an eclectic style sporting white John Fluevogs (the shoe equivalent to these PJD builds) who proudly showed off a picture of the bike he had retrieved from his former missus. It was a low-slung cruiser—one that shall remain brandless—with lots of leather and bling, and double chrome pipes no higher than a pebble’s height from the ground. I think I was only supposed to coo in awe at his reclaimed prize ride but I heard myself ask how well it cornered. “It doesn’t, really,” was his proud response, “but it looks so good, I don’t care.” (I may be paraphrasing.) I couldn’t argue with that!

And the men themselves? As fabulously entertaining and thematic as their work. Way to be consistent.

So…now that I’ve established my parameters, let the list begin.

I’m starting at the beginning, with the passion piece, the one bike that was part of the “settlement” between father and son, retrieved in a tension-filled episode, from Paul Sr.’s OCC showroom.

The Black Widow has history; Teutel family/American Chopper history. Paul Jr. built it during the OCC days and he refreshed it in the new series. Sure it’s dated, but taken in context it’s cool, and a fan favorite. It’s Spidey-goes-gangster and, like so many of these builds, it’s full of details that fit with the feel—webs for spokes, spider-thin frames and forks—even hanging cables look like webs.

I don't care what Jason thinks, this thing is cool.

Look familiar? It is, because it featured on Jason's "Five Worst" list where he thought it was so bad he couldn't muster more than a "Just no" to describe it. I disagree.

For starters, when the apocalypse descends, I hope this mastodon masterpiece is parked in my garage because it’ll clearly be able to take on the new world order. Plus I’m pretty sure I saw Charlize Theron on it in Mad Max: Fury Road. Also, who’s going to interfere with a bike that has the vicious decorative spikes and terrifying knuckle-knife levers?

Correct. I picked two of these because I think they look good together and yet, remarkably different and this metal armadillo could even be considered practical.

An avid adventure rider acquaintance of mine, who rides 365 days-a-year on any landmass not covered in water, recently journeyed up to the Arctic. It wasn’t his first trip, but it was the first time he modified his CCM for ice and snow—adding a ski to the front and a snowmobile back end.

I’m not sure the engine on this rig could handle the -40C temps—in fact, I picture it adapting more readily to The Last Jedi’s red salt-covered Crait—but the added traction could have come in handy, and imagine how absolutely mystical it would look gliding across a frozen tundra. Plus those front-end swords could cut icebergs, right?

That'll keep you moving no matter what the terrain.

More motorcycle than sculpture. Is it rideable?

This build is beautiful, and it even looks rideable. The front and rear fenders provide coverage, nothing on the bike might accidentally kill you and it’s just so damned pretty. Who can disagree? (*raises hand* - JM) I’d say more, but I’m picturing the outfit that would look best.

Once again, the attention to detail here is magnificent.

How could I not? It’s everything you could possibly look for in a theme bike. Absolutely NOT. MEANT. TO. RIDE. Please don’t.

Aside from being inexplicably menacing, this bike racks up the most most points for impracticality. That spiked bat alone would catch on clothes, hair, car doors, pets, plants, passersby. Then there are the spikes on the gas tank, ready to tear a hole through your chest when you’re reaching down to pull the pin on a grenade. What? Yes. There is a double row of grenades on the GAS tank. Okay. I know they’re not live…right?

This bike is so much fun to look at, like a good comic book. Every time you go back over it you see something new, in this case chains, spikes, blades, grenades, embossed leather, even a detailed drive belt.

You never know what kind of parking problems you'll run into.

And that’s exactly what makes these great. They’re over-blown works of wonder. Juvenile? I guess so. But so are a lot of the activities we love the most – unabashedly over-the-top. So don’t hate, celebrate!