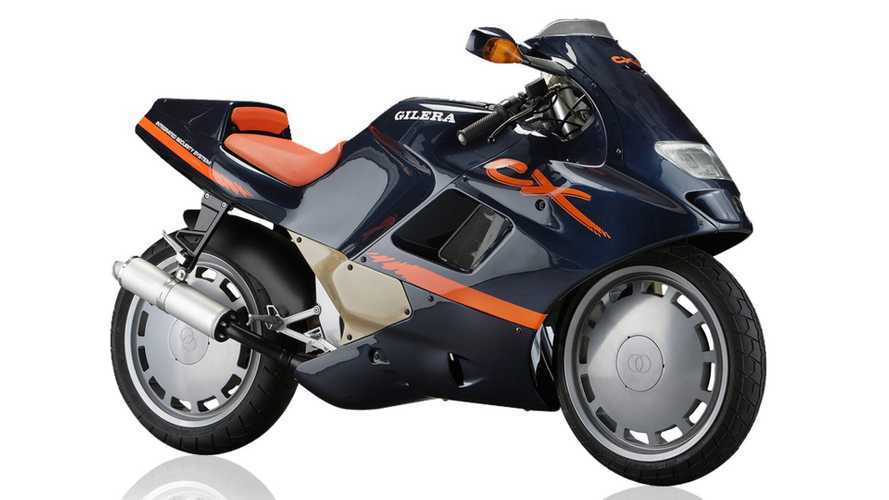 Ladies and gentlemen, the 90s.

Hey friends! Today we're digging through the vaults and bringing you a proto-Cycleweird article from way, way back in The Year of our Lord 2009. We've updated the article a bit with some tighter copy and a better picture for your enjoyment. Enjoy! -JM

You guys ever hear of the Gilera CX125? Wait, let me back up and start again. You guys ever hear of Gilera? Once upon a time, Gilera made killer little bikes. The company was founded in 1909 and, after decades of racing and selling cool bikes, was bought by Piaggio in 1969. Since then the company has released both small-displacement bikes and (primarily) scooters. Now, that's obviously not the whole story, and we can go into the company's storied grand prix racing career later, but we needed to tell you about Gilera so we could tell you about one of the company's weirder offerings—the CX125.

Released in 1991, this little packet of pure, compressed 90s awesomeness was designed by Federico Martini, who was also responsible for the Bimota DB1. Like that bike it features all-encompassing plastics, but we actually find the exaggerated front fairing more reminiscent of the Osmos Rolling Bird. It's defining feature, however, was the right side view created by the illusion of floating, near-solid wheels.

Other than the funny suspension, the CX125 was utterly conventional. Loosely based on the Gilera Crono race-replica, the CX125 used a detuned version of its 125cc two-stroke developing slightly more than 30bhp and redlining at 12,000rpm. Like the Crono, the CX125 used a steel frame rather than the aluminum item employed by rivals like the Cagiva Mito and Aprilia RS125. Still, it weighed in at a svelte 120kg (264lbs), meaning it was able to reach an impressive claimed top speed of 120mph.

The single-sided front end is similar to the BMW Telelever system in that it employs a swingarm, shock and forks, well, a single-sided fork. Check out the top yoke and its single, huge fork cap. Steering is accomplished by a series of connecting rods connected to the bottom yoke. The 17" wheel is dished so that the single caliper can sit on the bike's center line, which is apparently critical to the suspension system's operation, but not in a way we're able to comprehend.

At the time, Gilera claimed such advantages for the front end as increased rigidity, reduced weight and improved aerodynamics although, bizarrely, it didn't claim any anti-dive properties as on Telelever suspension. In practice, however, the CX had only 100mm of fork travel to the Crono's 130mm; testers reported it felt a bit "stiff." Sadly the CX front suspension lacked any adjustment. It's likely this low-spec nature was what enabled Gilera to sell it for only a very slight premium over the Crono, which was fully adjustable.

Gilera had big plans for the suspension setup,  including several larger capacity models, but those plans seemed to disappear during Piaggio Group's doldrums during the early- to mid-'90s. Too bad, too. Little bikes with risky big-boy bike styling kinda rules.