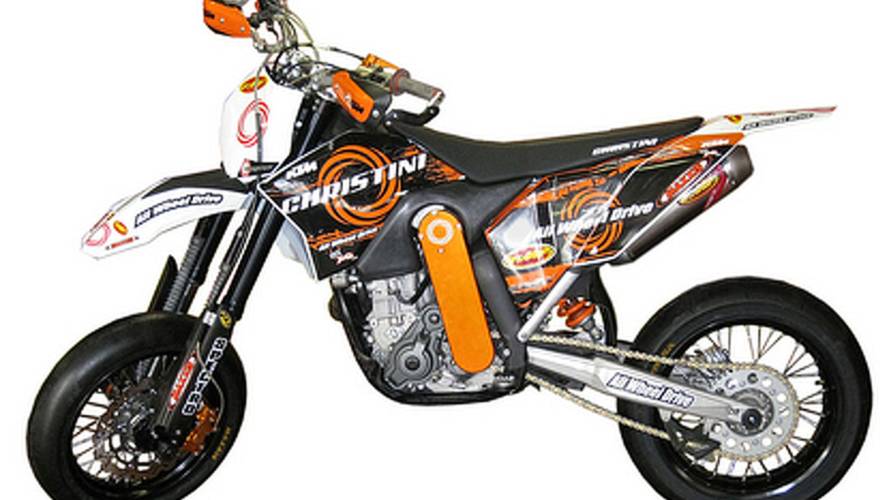 Christini Technologies has just released its first street legal all-wheel-drive motorcycle, the AWD SuperMoto. Unlike similar systems developed by KTM and Öhlins, the Christini conversion is mechanical, relying on a complicated system of drive shafts and chains to move power from the gearbox to the front wheel. The company already offers AWD conversions for Honda and KTM dirt bikes, so not only d...

Christini Technologies has just released its first street legal all-wheel-drive motorcycle, the AWD SuperMoto. Unlike similar systems developed by KTM and Öhlins, the Christini conversion is mechanical, relying on a complicated system of drive shafts and chains to move power from the gearbox to the front wheel. The company already offers AWD conversions for Honda and KTM dirt bikes, so not only does this supermoto application make sense, but also it should be available to customers in the near future.
>
Christini says it uses mechanical, rather than hydraulic, two-wheel-drive because it results in less power loss. But, with a complicated system of drive shafts and chains that culminates in a paired set of telescoping and counter rotating drive shafts driving the front wheel through a hub-mounted one-way clutch freewheel; we fear that the lack of power loss will be offset by immense complication.

The system works like this: a chain mounted to a secondary countershaft sprocket runs up to a gearbox mounted on the main frame rail; that drives a shaft which runs under the tank to a bespoke steering head; counter rotating bevel gears located within the head tube transfer power to the lower triple clamp; two small chains then send that power out to a counter rotating drive shaft mounted on each fork leg; those telescopic shafts run down to the front hub, spinning a one-way clutch freewheel. Ok, we're about half done. Power is sent to the front wheel at about 80% of the speed of the rear wheel. So when the rear wheel loses traction, the rear wheel spins faster than the road speed of the front wheel, engaging the one-way clutch in the front hub and sending power to the front wheel. A lever on the handlebar allows riders to discontinue use of the AWD system when desired.

In use, the system works a lot simpler than it sounds, but we still wouldn't want to try and service the miniscule parts located inside the frame, steering head and triple clamp.

Testers have reported that permanent two-wheel-drive motorcycles are able to begin accelerating earlier in corners and harder in slippery conditions. We're not sure how Christini's system, which only engages when the rear wheel slips, will differ from that, but expect the same effects, minus the ability to exploit the added traction before the rear wheel begins to slip. An analogous system would be the viscous coupling differential of the Fiat Panda 4x4. While we've found that vehicle to lack the low, speed stump-pulling traction of mechanical diff SUVs, it can attack slippery conditions at speed with unrivalled aplomb. The trick is to never let off the power. We'd expect similar results from the Christini.

Of course, being a motorcycle, the Christini won't behave entirely like a diminutive hatchback from Italy. The company claims, "An added benefit of AWD is that the front wheel does not want to wash out. When a front end tucks, the wheel stalls, stops turning, and begins to push. With the AWD system, as soon as the wheel begins to stall, power is delivered to the front wheel, forcing it to turn. With the front wheel under power, it is nearly impossible to wash out the front end."

At this point, you're probably thinking the AWD system would make a lot of sense in a street bike, where its prowess in slippery conditions could be both a safety and a performance aid. The first step to achieving that is through road racing; Roland Sands is incorporating the system in one of his SuperSingles. We intend to find out more.