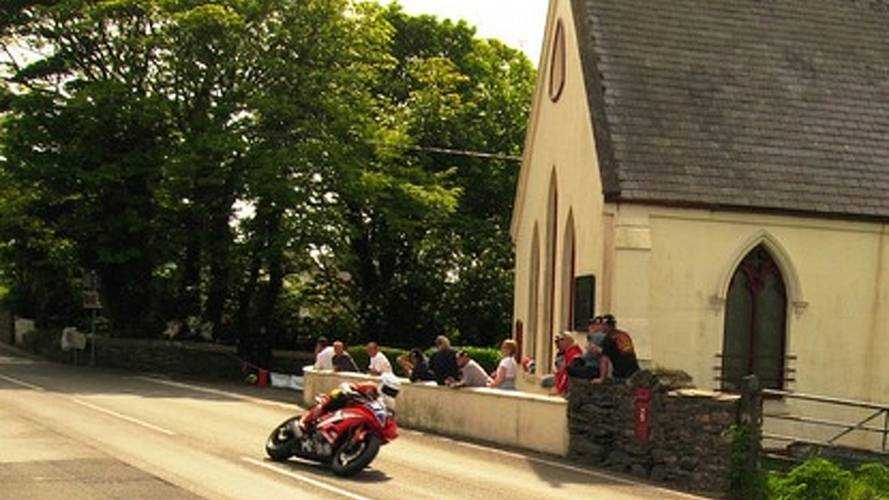 Six Americans will be racing at the Isle of Man TT this year: Mark Miller, Jimmy Moore, Thomas Montano, Scott Jensen, CR Gittere and James Vanderhaar. Racing starts on the mountain course on June 6.>Leading the way is Californian Mark Miller, whose best lap in 2007 of 121.756mph on the RSV1000 Aprilia makes him the fastest American rider ever to have lapped the 37-_ mile course. With 20 AMA podium...

Six Americans will be racing at the Isle of Man TT this year: Mark Miller, Jimmy Moore, Thomas Montano, Scott Jensen, CR Gittere and James Vanderhaar. Racing starts on the mountain course on June 6.
>Leading the way is Californian Mark Miller, whose best lap in 2007 of 121.756mph on the RSV1000 Aprilia makes him the fastest American rider ever to have lapped the 37-_ mile course. With 20 AMA podiums to his name from Superbike and Superstock competition, Miller has so far picked up six bronze replicas from his eight TT rides but 2009 represents his best chance of cracking the top ten as he lines up for WA Corless/Jackson Racing. Armed with a 1000cc Suzuki and an ex-Bruce Anstey TAS 600cc Suzuki, Miller is definitely one to watch.

Joining Miller is Jimmy Moore who returns for his third TT with JMF/Millsport Racing with a full compliment of Yamaha machinery. The Oregon man made a huge impression on his debut in 2007 when, as part of Team Blackhorse Honda, he took a best result of 15th in the Supersport race, just 48 seconds behind his illustrious team leader Ian Lougher. Moore also posted a best lap of 121.381mph on his 600cc Honda, the fifth fastest time ever by a newcomer and all the more credible as the four riders ahead of him on the all-time list were all on 1000cc machines.  He has, perhaps, the best track record of all the Americans with two AMA titles to his name, the 2001 Supersport 750cc crown and the 2002 Superstock. Forced to pull out of last year's event after problems in practice, Moore, like Miller, will compete in all five solo races.

Thomas Montano needs no introduction to seasoned TT fans having made his debut as far back as 1992. The Californian has a best finish of 9th whilst he can also boast no less than 12 top twenty finishes to his name. Montano was the first American to lap the Mountain Course at more than 120mph, in 2005, and now has an impressive tally of 5 silver and 15 bronze replicas to his name. He will contest the two Supersport races for Taj Mahal Racing.

The remaining 3 American entrants are all newcomers to the event with all three having impressive career credentials. Arguably, the best of the 3 is 33-year old Scott Jensen who impressed TT organisers with his approach, both on and off the track, at last year's Macau GP. Hailing from South Dakota, Jensen has been the leading privateer in the AMA Superbike series for the last two seasons, finishing 11th overall in 2008 and 12th, 16th and 13th in 2007, 2006 and 2005 respectively whilst he also contested the US round of the World Superbike Championship at Miller Park in 2008. Jensen, who finished 16th in Macau last year will ride 600cc and 750cc Suzuki's for the well-established PRF Racing team in the Supersport, Superstock and Senior races.

North Carolina's CR Gittere is another of the leading privateers in the AMA Championship, having finished 12th in the 2004 Daytona 200 Superbike race. A true all-rounder, Gittere has also competed in the Baja 1000 Endurance race. A highly professional competitor, Gittere has been studying the Mountain Course for some time and plans to become a regular for many years to come. He rides a Mick Charnock-prepared TCR/DP Coldplanning 1000cc Honda in the three big capacity races.

The final American newcomer is 29-year old James Vanderhaar who started racing in 2003 and is one of America's leading Endurance riders having ridden for Fast by Ferracci and Yamaha USA. After finishing 3rd in the 2006 Supersport series, Vanderhaar moved in to the Superstock class and won the 2008 AMA WERA National Endurance Championship riding a Yamaha USA supported Yamaha R1. The Kentucky rider has entered all five races on his own R1 and R6 Yamahas.