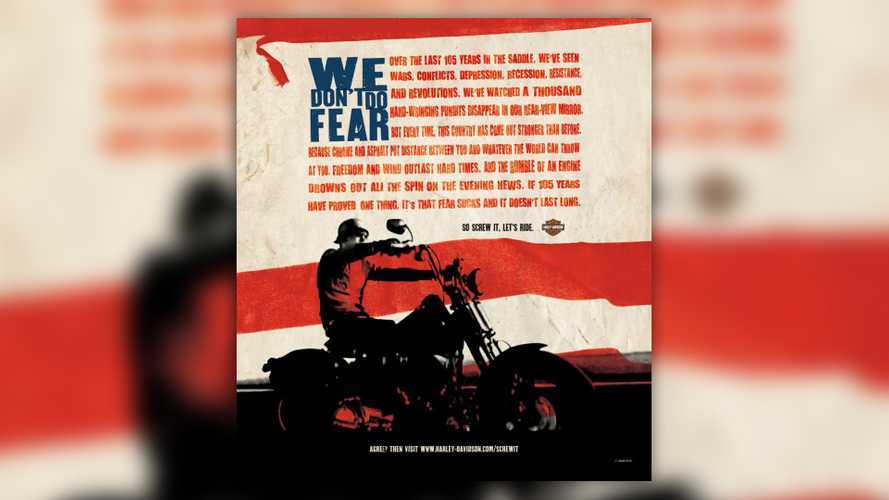 Could this be any tackier?

Harley-Davidson's new campaign "Screw It, Let's Ride" relies on Middle America's growing concern with worldwide economic strife triggered by the sub-prime mortgage crisis, continued war in Iraq and Afghanistan, and astronomical fuel prices. Carmichael Lynch, Harley-Davidson's Agency of Record, plays on the working class's need for respite with the line, "and the rumble of an engine drowns out all the spin of the evening news," spoken in a soft Southern worker's drawl. That's some nice spin ya'll done got there, Yankees.

From an advertising perspective, the print campaign is a master-class work of visual cues pushing all the classic xenophobic and patriotic buttons. The youthful lone male with a soldier's physique amid the flat landscape of the heartland plains evokes Eastwood-like romantic notions of a cowboy's rugged independence. The stained and wrinkled flag is perfectly tattered, evoking the struggle of freedom. The major colors of the ad are that flag's red, white and blue, with the red stripe soaking the soldier's body, evoking blood, passion, courage, honor and, of course, sacrifice.

"We don't do fear. Over the last 105 years in the saddle, we've seen wars, conflicts, depression, recession, resistance and revolutions. We've watched a thousand hand-wringing pundits disappear in our rear-view mirror. But every time, this country has come out stronger than before. Because chrome and asphalt put distance between you and whatever the world can throw at you. Freedom and wind outlast hard times. And the rumble of an engine drowns out all the spin on the evening news. If 105 years have proved one thing, it's that fear sucks and it doesn't last long. So screw it, let's ride."

The final copy, located at the bottom of the ad, is known in the industry as a "call to action." It asks if the reader agrees and if so, to visit the campaign's site. The background image there features a Wyoming-esque view of a straight empty road disappearing into the mountains. And then, the animation and voiceover of a shortened version of the print ad follows. The narrator has a deep voice with the perfect twang of a Southern man-of-the-earth. Then Harley gives you the chance to customize the "rally cry" with your own story while oh-so-innocently giving the viewer that last call to action, "Wear Our Rally Cry." Naturally, in order to do that, the viewer has to go to the nearest dealer and spend money.

We're sure the people at Carmichael Lynch are slapping high-fives all round as they've bulls-eyed the current Harley demographic's need for both patriotism and escapism while simultaneously getting them to buy more Harley-branded bandanas and vests. However, this campaign also crystallizes Harley Davidson's own blithe disregard toward the needs and wants of its future customers: generations X and Y.

If the youngish guy in the print ad had a choice of any bike in the Harley line-up, we're betting he'd choose this new Europe-only XR1200 over that rickety springer hard tail he is pictured on. Except he can't have it because he lives in America. The XR1200 is the direct descendant of Harley's last competitive golden era, when the 1960s Sportster was the fastest production motorcycle money could buy and the epitome of American motorcycle engineering. It also combines actual performance with real, rather than camp, clichéd design, two things no other bike in the Harley range even comes close to managing.

Formerly the director of marketing for GM's ailing Pontiac division, Harley-Davidson Senior VP and CMO Mark-Hans Richer's decision to market the Missouri-made XR as an overseas-only model is comparable to Triumph refusing to sell the Bonneville in England. As American motorcyclists, we find the fact that an American icon can be bought anywhere else in the world but here to be grossly insulting.

Also insulting is the suggestion that our patriotism and unique character as a nation can be summed up with gross commercialism and outdated, uncompetitive, and overpriced products.

If Harley is screwing anything, it's themselves.