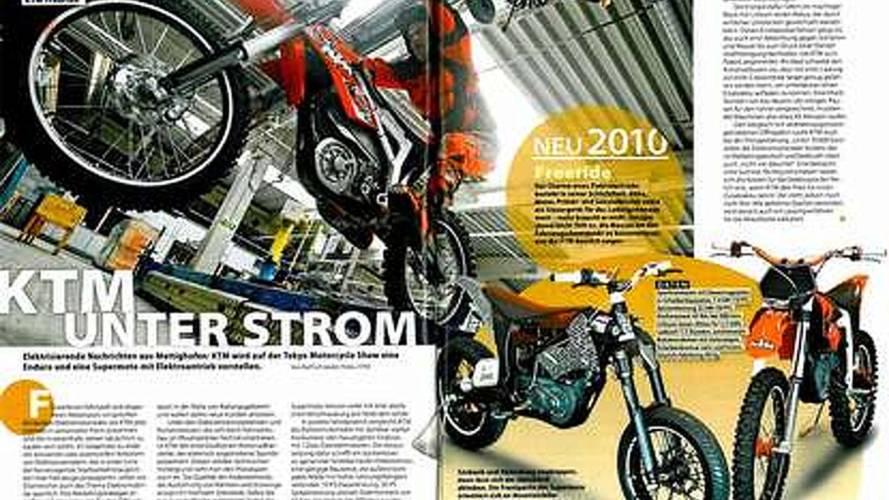 Das Motorrad has blown the embargo on pictures and info of the That price translates to around $13,500, considerably more expensive than the Zero X, which retails for $7,495. The KTMs produce 30bhp and 33lb/ft of torque and use a 2.5kWh lithium-ion battery pack. Weight is 90kg (198.4lbs) and the range is approximately 1.5-hours. While the battery pack carries .5kWh more capacity than the Zero,...

Das Motorrad has blown the embargo on pictures and info of the That price translates to around $13,500, considerably more expensive

33lb/ft of torque and use a 2.5kWh lithium-ion battery pack. Weight is

battery pack carries .5kWh more capacity than the Zero, the rest of the

make up for that weight. The spindly frame appears to be tubular steel

which, in the case of the enduro, is covered with some tacky silver

plastic to make it look like cast aluminum. The Zero uses a sexy

While the enduro and supermoto appear to share identical frames and

powertrains, they do differ in components, with the supermoto running a

in place of the enduro's conventional setup. One part that does look

Specs aside, we can't help but be disappointed with KTMs first electric

motorcycles. We were hoping for something sexy and fast like the KTM 125

Stunt and Race concepts from EICMA, yet are left with utterly

for next year's production bikes that these concepts preview. An

established motorcycle manufacturer like KTM should be able to leverage

or low cost, these bikes appear to be neither.

One slim glimmer of hope: there's talk of a battery leasing scheme in

the article, which at least indicates that someone's thinking about an

alternative business model for selling these. In an ideal world we'd

like to see KTM sell customers the bike sans batteries, then lease the

batteries to customers, maybe even showing up at races with a support

Update: with a better translation, it looks as if the battery leasing may actually be battery hot swapping, with a single plug design that's so shielded, it can withstand the force of a pressure washer. Damn you Germany and your bizarre technical terminology.