How to use 'spy' photos for viral marketing 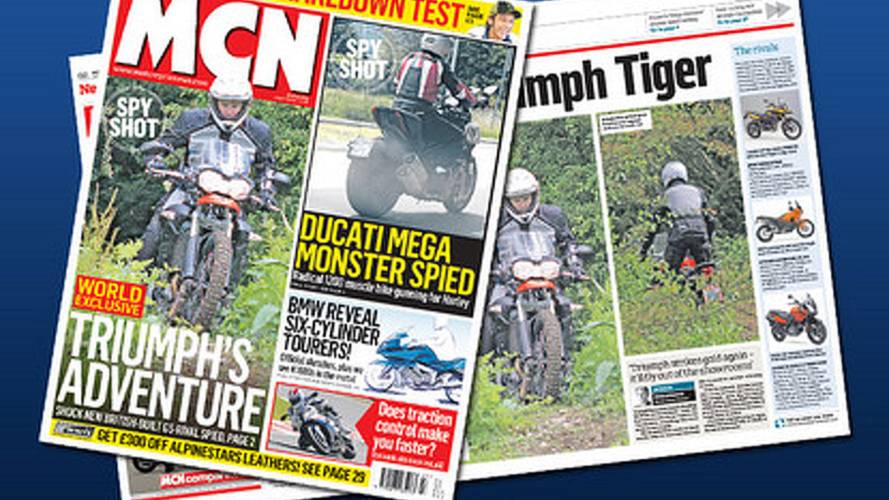 Need to create buzz around an important new product prior to its release? Why not provide the media with "spy" photos that you've had taken along with carefully scripted information. Do so at regular intervals and you'll have magazines, forums, hell, everyone frothing at the mouth for more, more, more. Everyone's doing it, but here's Triumph's detailed plan. >The email below was sent out by...

release? Why not provide the media with "spy" photos that you've had

taken along with carefully scripted information. Do so at regular

intervals and you'll have magazines, forums, hell, everyone frothing at

the mouth for more, more, more. Everyone's doing it, but here's

The email below was sent out by Triumph the day before media outlets like MCN and Motociclismo.it ran "exclusive" spy photos of the Triumph Adventure and the rest of us grabbed the video off the minisite.

Triumph's not the only company to do this, the Ducati Multistrada 1200 was unveiled in this manner and Kawasaki's running a similar, if bizzarely transparant effort for the 2011 Kawasaki ZX-10R. Think Motociclismo just happened to turn up at the same trackday as the Aprilia Tuono V4?

There's three problems with this approach:

1. Over promising and under delivering. Remember "Star Wars Episode 1?" Promise a brave new world, but deliver Jar Jar Binks and all the hype will backfire.

2. Audience saturation. How many new bikes can be "leaked" in this manner before the public tunes out? Surely, there's got to be a maximum saturation level for black tape and fuzzy photos. Unless you're already running a spy photo campaign, you risk hopping on the bandwagon after the public has stopped responding.

3. Creating demand before there's a product to fulfill it. Reveal a product too soon and you're effectively shortening the time period in which it will feel shiny and new. Witness the new Chevy Camaro. First shown in concept form last decade, by the time it actually went on sale it already felt like an old product. What's it going to feel like in five years?

Anyways, here's how Triumph is managing its campaign:

A number of "spy photographs" has leaked and the following statement to
key international media ahead of the switch on of a new Adventure micro
site......

"These exclusive spy pictures show Triumph's new adventure bikes being
filmed last week for an upcoming website promo. The shots, scooped inside
a secure testing facility, show two distinctively different models being
filmed: the orange bike being ridden up and down and off road trail while
the black bike stayed on the handling and high speed courses.
A Triumph spokesperson refused to say any more than: 'We can confirm that
Triumph will be entering the adventure bike sector soon with two all-new
models. We are currently entering the final development stages of the new
bikes and everyone involved in the projects is very excited about how
things are going.'
We understand from an insider that Triumph is set to launch a new website
imminently for the new bikes. He confirmed that Triumph has registered the
domain name www.triumph-adventure.com and that the site was due to go live
'very, very soon.' "

•     The Adventure segment represents a significant new business
opportunity for your dealership and for Triumph. In most markets this
segment is growing and attracting bike buyers from other segments. It is
also a sector with high "add on" sales of clothing and accessories.

•     The segment is dominated by the BMW GS series and models from Honda
and others - we need to directly conquest these customers to Triumph
starting with our two new 2011 Adventure models which complement the
existing more 'touring biased' Tiger 1050.

•     BMW have dominated the segment for many years and are now synonymous
with "adventure" so we have to earn this business with great products,
marketing and an outstanding  dealer sales and after care process.

•     This initial briefing gives you an understanding of what Triumph
will be doing and what you need to do at dealer level.

What will the new Triumph's deliver?

There are two all new Triumph adventure bikes coming soon - they score on
all counts: especially on specification, durability/reliability; on and
off road performance, handling and comfort and will come with a full range
of accessories and clothing too.

•     Specific detailed product information will be released on the site
(and with further 'scoops' to the press) against a tightly managed
schedule in this period - for example the model names, engine sizes etc.

•     This micro site will run through to November 2nd with monthly
content updates, gradually releasing more information on the two new bikes
and related products.

•     Prospects who "sign up" will be automatically sent updates each
month until November in their preferred languages*.

•     The micro site itself will be given fresh video and content during
the first week of each month through to November 2nd.

•     In the first week of November all signed up prospects will be
transferred to the main site where they will be progressed to e-brochure
download, can seek out their local dealer for a test ride** and will be
prompted to visit their local or preferred dealer.

Check out the first Adventure video - available from your Subsidiary or on
line at www.triumph-adventure.com very soon.