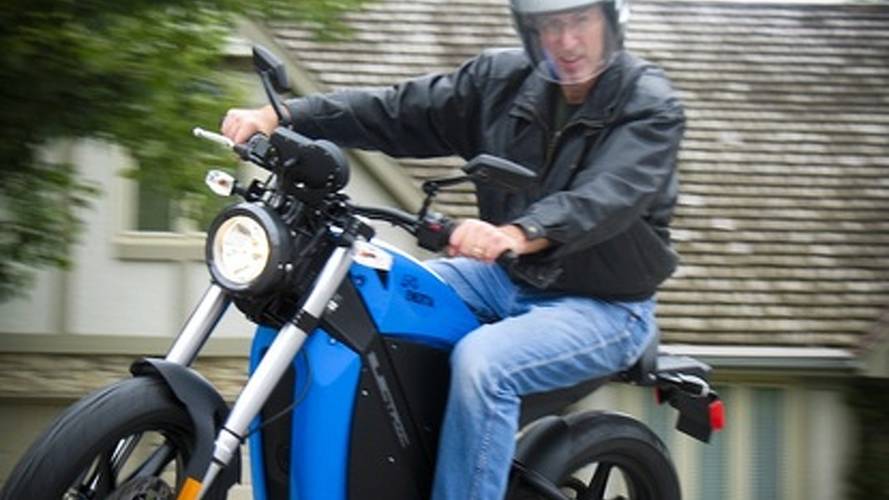 The Brammo Enertia I won was delivered to my house via FedEx on June 8, 2010, preceded by a cell phone call: "This is Missy, your FedEx driver.  I got a motorcycle in a box in the back of the truck.  Are you ready for it?"  The unboxing of it was an event in itself, covered in-depth on my blog.  Although it showed up fully assembled and fully charged (how many motorcycles show up "fully charge...

The Brammo Enertia I won was delivered to my house via FedEx on June 8, 2010, preceded by a cell phone call: "This is Missy, your FedEx driver.  I got a motorcycle in a box in the back of the truck.  Are you ready for it?"  The unboxing of it was an event in itself, covered in-depth on my blog.  Although it showed up fully assembled and fully charged (how many motorcycles show up "fully charged"?), it still had to be uncrated, an exercise that took about 45 agonizing minutes.

I must confess that the Brammo Enertia was not the first electric motorcycle I ever rode.  My first electric motorcycle ride actually took place at  Infineon Raceway, as the TTXGP teams were packing up to leave.  I had the opportunity to ride the EMS bike that had been confiscated following the HFL incident noted above.  I will admit here that the throttle response intimidated me.  To me, it went from zero to neck-snapping with the slightest twist of the throttle.  The instant torque became a bit of a secret fear of mine as I waited for the arrival of my Enertia.

I shouldn't have worried.  Brammo has engineered a bike with a power curve that balances "responsive" with "gradual."  Rather than intimidating, it was empowering -- I found that, after just a few starts, I was twisting the throttle with confidence and the desire to get off the line first and fastest.  The suspension was firm and the bike, at about 325 lbs, seemed substantial, yet agile.  On a particularly twisty road near my house, the bike seemed almost alive underneath me, begging for more speed from my hand and for me to grow some balls--strike that--some confidence.  Damn, but is this a fun bike to ride.

Note that there is little to no "engine braking" that occurs when you roll off the throttle.  This certainly works to your advantage down hills, when you can watch your odometer rack up the miles while your battery level remains unchanged.  It does mean that you would tend to use your brakes more often than you would on your basic I.C.E. bike.  The Brembo brakes on the Enertia handle this well, allowing me to stop within inches of my 15 year old daughter who I bribed into filming me.

You get a lot of quizzical looks when riding the Enertia.  The fact that this is the first Brammo in Kansas City is part of that.  The other part is the lack of noise when you ride.  This bike is far from silent, however.  In fact, after riding it for about 10 minutes, a cooling fan kicks in and, I have to admit, it's a bit loud.  Maybe they can get James Dyson to invent a quieter one on future models.  And, not to rag on Brammo about this, but I have a story about the first time I heard the fan, which occurred on my first ride, the day it was delivered.  It was stormy that day, and I managed to fit my first ride snugly between some squall lines passing over the Kansas City area.  I came up to a stop sign after a brief test of the upper limits of the Enertia's speed on the highway (65 tops, 62 comfortably).  At the stop sign, noticing the grey-green clouds roiling above me, I heard what I thought was the drone of a tornado siren.  It was the fan.  It wasn't so loud that you'd have to shout or even really raise your voice to be heard.  Just loud enough to keep you from running in "stealth mode" and sneaking up behind unsuspecting pedestrians.

Last Sunday, I decided to do a test-run of my daily commute.  Normally, I'd take the highway, but I had heard enough stories about how the high speeds really sapped your battery.  I took a series of surface streets that had speed limits of 40-45 mph.  From a battery that was charged at 99.9% (Oh, elusive .1%, I will track you down!) I set off for my office, approximately 10 miles away.  I managed to hit most of the red lights on the way, and there were many of them (note to self: next time, count the lights).   I arrived at my office 23 minutes later with 62% of my battery power remaining.

I began considering "Plan B," just in case I ended up with the last half of the batteries draining twice as fast as the first half.  There were several places along the way that I could plug in, if necessary: friend's houses, Chinese restaurants, sports bars, bars, and taverns. I shouldn't have worried.  I pulled into my driveway with 22% remaining.  This will work for me.  Having corresponded with other Brammo owners and after reading many posts by Brammo Lead Designer Brian Wismann, I know that my range will gradually increase as the batteries condition themselves over time.  I still have less than 55 miles on the odometer so I have miles to go before I reach that point.

The Brammo Enertia turned out to exceed the hype (much of which originated from me) with a well-designed, balanced, and responsive machine that inspires confidence and is fun to ride.  The lack of a clutch, the smooth power curve, and the intuitive handling will help first-time riders overcome the anxiety that accompanies the new rider's early experiences on powered two-wheelers.  The lack of emissions from the bike will help us S.U.V. drivers pay the penance that is due from us for disclaiming our responsibility for events like the B.P. Deep Water spill.  If I can find a 110-volt outlet that is powered by a renewable source (wind or solar), then I can even allay the guilt from using electricity that is generated by my local (mostly) coal-powered utility.  All that environmental angst aside, you should give the Enertia a chance -- test rides are available at the six Best Buy locations (two near L.A., two near San Francisco, and two in Portland, Oregon); Brammo Headquarters in Ashland, Oregon; and yes, in Kansas City.  Brammofan's mission includes the selfless sacrifice of allowing others to ride my bike.  All you need is a motorcycle endorsement, a helmet (unless you wear an XL in which case you may borrow mine), and a willingness to keep an open mind.  This bike won't win any long distance races, but it could easily fill the need of a commuter (Re-fueling is free when you charge at work) or even someone who just wants to have a fun ride across town to a friend's house to plug in.